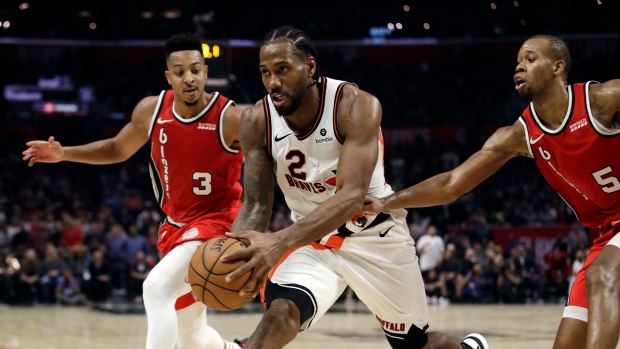 One night after he was held out against the Milwaukee Bucks, Kawhi Leonard led the way for the Los Angeles Clippers as they took down the Portland Trail Blazers 107-101 on Thursday.

After the game, Leonard was asked about the league issuing a statement detailing a patella tendon injury in his left knee that the league says was the reason he missed Wednesday's contest.

According to ESPN's Ohm Youngmisuk, Leonard said it was "shocking" the NBA revealed details about his injury.

"I mean it was shocking, but it doesn't matter to me," Leonard said. "I'm not a guy that reads the media anyway. We're going to manage it the best way we can to keep me healthy and that's the most important thing, me being healthy moving forward."

Before the game, the NBA fined the Clippers $50,000 for comments made by head coach Doc Rivers that were "inconsistent" with Leonard's injury after Rivers implied Leonard's absence against the Bucks had more to do with load management than it did with an injury keeping him out. Leonard also sat out a game against the Utah Jazz on Oct. 30.

"The team has reasonably determined that Leonard is suffering from an ongoing injury to the patella tendon in his left knee and has been placed by the team at this time on an injury protocol for back-to-back games," the league's statement read.

"He feels great," Rivers said of Leonard Wednesday. "But he feels great because of what we've been doing, and we're just going to continue to do it. There's no concern here."

"I'm not getting into it. What we said, we said," Rivers told reporters after the league's decision to impose a fine.

Leonard scored 27 points and added 13 rebounds in Thursday night's win. For the season, the 28-year-old is averaging 29.0 points per game to go along with 8.1 rebounds.