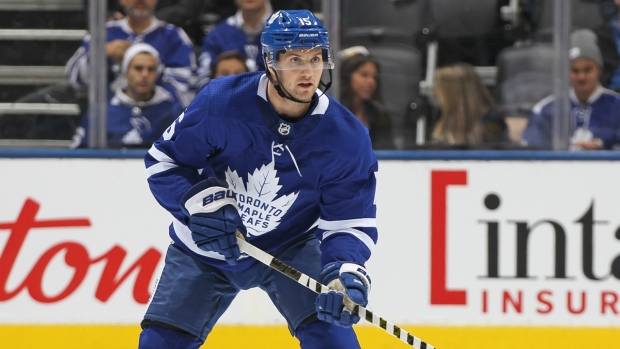 The Toronto Maple Leafs were one of the teams that had to make a difficult decision in preparation for the Seattle Kraken expansion draft.

Due to a cap on the number of same-position players a team can protect and their strength up front, the Maple Leafs used a protection slot on defenceman Justin Holl – a controversial move at the time.

The decision was debated for several reasons. Chief among them was the fact that Holl hadn’t established himself as anything more than a solid bottom-four defender, and the opportunity cost of protecting Holl meant exposing more talented forwards.

The Kraken grabbed winger Jared McCann, just days after the Leafs had acquired him from the Penguins. McCann is 36th in rate scoring (15 points in 19 games) through the first two months of the season, with John Tavares and Auston Matthews as the only two Leafs with better marks.

The bet on Holl was also multi-faceted. The team liked what they had in a player who showed promise defending the run of play on a team that, at least historically, has not handled that component of the game very well.

The team also bet that the cost of replacing Holl on the market would be significant. Putting aside commentary on Holl’s game for a minute, the bet on replacement costs was accurate – free agency was a madhouse for second- and third-pairing defender overpays.

There is another interesting wrinkle from the fallout of this expansion draft, and that’s the forward the Kraken did not take, Alex Kerfoot.

Kerfoot has been a strong middle-six option for the Maple Leafs since being acquired in 2019-20, but his offensive production has lacked. Head coach Sheldon Keefe had struggled with finding opportunity to unlock the offensive game we saw in the early parts of Kerfoot’s Colorado career.

Until this season. With players like Zach Hyman gone, the Maple Leafs started searching internally for replacement options at wing. Kerfoot has been a logical choice. This season, Keefe has moved Kerfoot – who has experience at centre – to a full-time position on the wing of Tavares, joined by William Nylander.

That’s a far cry from what Kerfoot has been accustomed to in Toronto. Consider the differential in teammate quality from his first two years to this season.

The first two seasons in Toronto saw Kerfoot playing to a break-even goal differential with a smattering of middle-six options. The coaching staff experimented with Kerfoot playing alongside Tavares and Nylander in spots, but Kerfoot would see just as much time playing with the likes of Ilya Mikheyev and Pierre Engvall.

Kerfoot’s deployment has been much more predictable over the first two months of this season. He’s entrenched on a line with Tavares and Nylander, and just as notably, is seeing a marked increase in the quality of defenders behind him – Jake Muzzin, Morgan Rielly, and T.J. Brodie have back-stopped hundreds of Kerfoot minutes already this season, a shift from years past where Holl was Kerfoot’s most common defender.

On both ends of the ice, Kerfoot’s net production has improved. Some of this is the fact the Maple Leafs are shooting at a blistering rate with Kerfoot on the ice (12.5 per cent), so it’s been a bit easy to rack up assists over the first two months. Rate goal scoring has exploded in a way that will come back to Earth (+94 per cent year over year) but expected rate goal scoring, a reliable indicator that cools shooting percentage volatility, is also up (+25 per cent year over year). 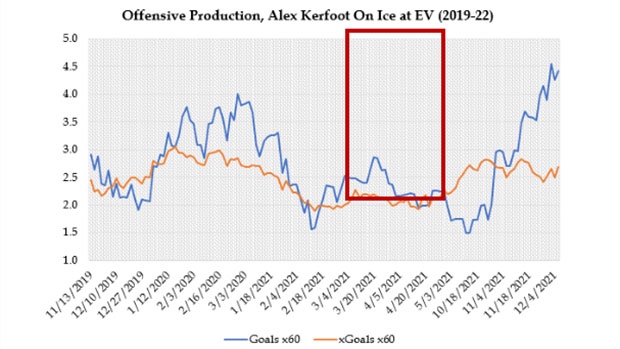 One other thought on that rapid surge in shooting percentage. Not all of it is noise. While we would expect Kerfoot’s line to cool off a bit, consider what the offensive shot profile looks like with the Maple Leafs on the ice, and compare it against what the Kerfoot line was generating in years past.

This season, a healthy amount of shooting volume is coming from the most dangerous areas of the ice, inside the home plate area. That’s one way to keep converting on a larger percentage of your chances (via HockeyViz): 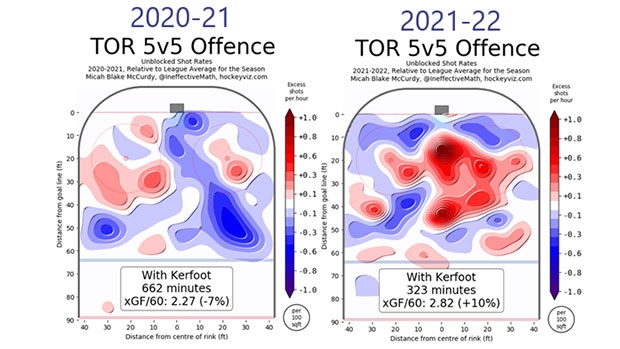 Kerfoot has always been a good player, but it seems Keefe and his coaching staff have found something with him playing alongside Tavares and Nylander full-time. The forward logjam Toronto has right now will ensure healthy competition going forward at the position, but right now, it’s hard to see why the Maple Leafs would consider peeling Kerfoot away from this line.

They have been dominant and are a key reason why Toronto is so well situated in the Eastern Conference.