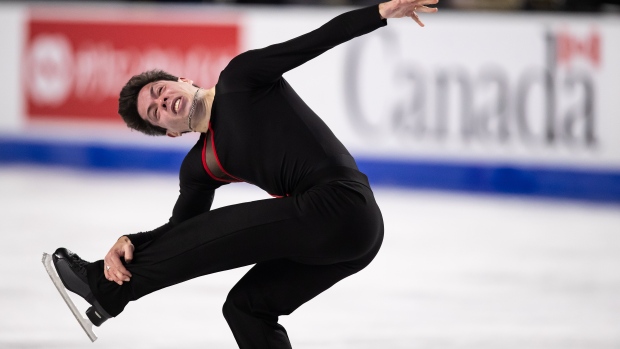 BEIJING — If there's any athlete who can travel the milk run to the Winter Olympics and compete the next day, it's Keegan Messing, says Mike Slipchuk.

The Canadian men's figure skating champion is expected to arrive at the Beijing Games on Monday, a day before the men's short program, and having already missed the team event after contracting COVID-19.

"Everywhere (Messing) goes is a two-day adventure," said Slipchuk, Skate Canada's high performance director. "But Keegan and his coach Ralph (Burghart), they're very low key and they're determined to be here."

Messing lives in Girdwood, Alaska, and so virtually every competition poses travel challenges. It took him 30 hours and three flights to arrive in Ottawa for last month's Canadian championships, where he won gold.

But this challenge threatened to end Messing's Olympic dreams altogether. He tested positive in Vancouver before Canada's charter to Beijing, and thus needed four negative tests before getting the green light to go.

A charter for one athlete was out of the question.

Having passed three tests, Messing was en route to Montreal on Friday night, where Skate Canada expected him to pass No. 4 and then board a flight to Beijing, by way of one of the four global hubs Games participants are required to travel through.

Messing's positive test cost him competing in the team event. Canada, with national silver medallist Roman Sadovsky stepping in to skate men's singles, was in sixth place after three of the four short programs on Friday. Madeline Schizas will compete in women's singles on Sunday, with Canada needing to finish in the top five to advance to the free programs.

Messing, who competes for Canada because his mom was born in Edmonton, was 12th in his Olympic debut in 2018 in Pyeongchang. He was sixth at the world championships last spring.

Slipchuk said Messing, who has no symptoms, spent the first few days in isolation running up and down the stairwell of his hotel at the Vancouver airport. An airport security guard had been assigned to him.

Private ice time was arranged for him so he could practise the last few days.

"So his last couple days has been full training and they're sending me videos, so they're keeping me in touch with what he's doing," Slipchuk said.

"By the time he gets here, it'll be just adrenaline because the men are done so quick. And that's the other thing, it's just our luck of the draw that the men happen to be the first event of these Games which they haven't been for forever. But this is part of it."

His arrival will be a boost to the Canadian team.

"Everyone feels bad for him," he said.

Slipchuk added that Messing has been one of the team's most tested athletes this year since he has crossed the Canada-U.S. border so often.

Messing's trek to the Canadian championships, caused by a snowstorm on the west coast and cancelled flights amid the crush of COVID-19, created an additional headache. His luggage, including his skates, didn't arrive in Ottawa when he did. His skate manufacturer Jackson drove him a new pair from their outlet near Toronto to Ottawa. He was breaking in the new boots when his luggage arrived the night before his competition.

This report by The Canadian Press was first published Feb. 4, 2022.