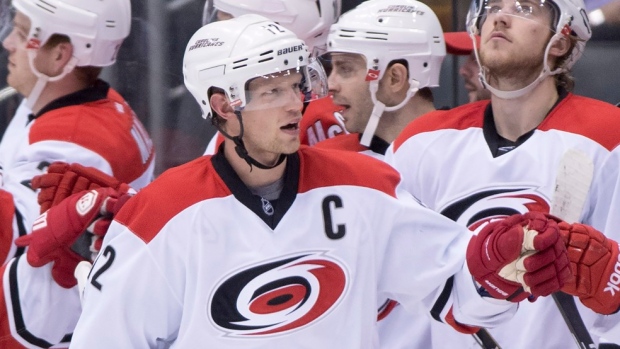 The Metropolitan division’s evolution from middling to unforgiving is one of the big reasons why Eastern Conference hockey is on the rebound in the NHL.

In a best case scenario, the division can send five teams to the playoffs next season (worst case scenario, three!). The Rangers, Penguins, Islanders, and Capitals were all so good last year, it’s hard to think any one of those teams would fall out of the picture. But the Blue Jackets and Flyers have made strides this off-season, too. Six teams pushing for less-than-six post-season berths is difficult enough. But, what if we add a seventh team to that picture?

One of the curious developments last regular season – that, understandably, went largely unrecognized – was the improvement of the Carolina Hurricanes. I say understandably because they were one of those three or four teams truly slotted in hockey purgatory. Bad enough to not factor into any potential playoff race, but not dreadful enough to be interesting from the perspective of draft lottery implications.

The Carolina improvement was a real thing, though. In the first half of the season, the Hurricanes accumulated just 30 points – 29th in the National Hockey League, only ahead of the lowly Oilers. In the second-half of the season, the Hurricanes accumulated 41-points, putting themselves at a more respectable point-per-game pace.

So, we did see some growth on raw wins and losses. But Carolina’s improvement was subtly more impressive than a couple of extra wins here and a couple of overtime points there – at even-strength they were competitive, with brief stretches of play that left you perplexed at how such a decent-looking club was in the gutter of the standings.

On that controlling play point: it was a very real thing in Carolina, and the strides they made in the second-half of the season – at least in part – led to their progression in the standings. Consider their improvement and raw totals against some other Metropolitan teams, and notice the company they keep. 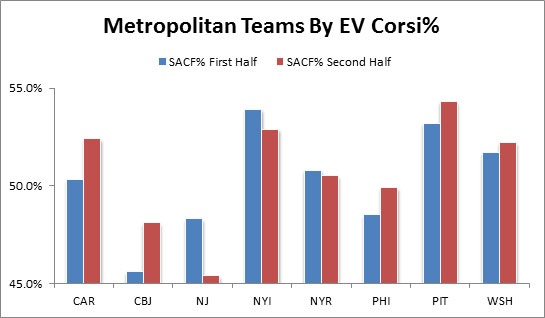 Carolina was an average 5-on-5 team in the first-half of the season (50.3%) by this metric, but moved into the upper echelons during the second-half of the season (52.4%). Their improvement, relatively speaking, largely tied into two channels: (a) the team probably wasn’t as bad as their first-half performance indicated; and (b) they improved on those numbers enough to become a very game 5-on-5 team down the stretch.

We know possession is of critical importance, but of equitable importance is goaltending. We have seen decent teams sandbagged by porous goaltending, and we have seen really bad teams elevated in the standings on the shoulders of one brilliant netminder. Carolina falls into the first category, not dissimilar to what Dallas experienced out West last year.

Carolina’s goaltending was abysmal last year. Their 90.9% EVSV% was only ahead of Edmonton, and there wasn’t much daylight between those two teams. The interesting question immediately becomes: What would Carolina have looked like last year with just average goaltending?

That doesn’t take much work. We can plug in the league average EVSV% -- about 92.3% -- against the number of shots they conceded at 5-on-5, and see what effect it has on their goal differential. Would decent goaltending have turned this middling team into a good one?

WHAT'S THAT ABOUT AVERAGE GOALTENDING?

We know Carolina – from a possession point-of-view – was better than advertised, and more importantly, not the problem for Bill Peters. This table highlights the actual problem, which was that the goaltenders simply couldn’t turn away shots. Even ordinary goaltending performance would’ve brought this team from lottery hopeful (43%) to in-the-mix (48%).

So, it shouldn’t come as a surprise to anyone that Carolina’s big move this off-season was acquiring Vancouver goaltender Eddie Lack at the Draft. Cam Ward’s numbers have been cratering for years now, and even if the jury’s still out on Eddie Lack, his career-to-date numbers suggest he’s the best option in Raleigh.

So yes, it’s quite the interesting situation brewing in year two of the Bill Peters era. Expectations are low, and even if everything breaks right, this team will still be a long-shot to truly steal a playoff berth. But, even modest improvement from last year’s campaign could bode poorly for the rest of the division. Any points they tack on in the standings will come at the cost of another team, and even just a handful of victories could shave available playoff berths in the Metropolitan from five to four, or from four down to three.

To that extent, the job of at least six other coaches in the division just got a bit trickier.