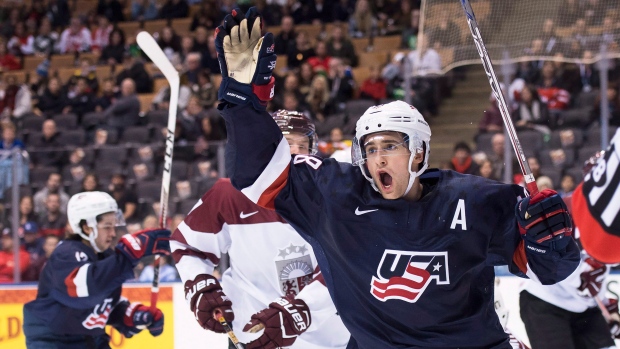 Patrick Harper opened the scoring for the Americans (1-0-0) 6:27 into the game, but Renars Krastenbergs responded for Latvia (0-1-0) to make it 1-1 after 20 minutes in the tournament opener for both teams at Air Canada Centre.

The U.S. regained the lead for good when Colin White scored 6:29 into the second and Keller made it a 3-1 contest late in the period.

"We got better as the game went on," said American coach Bob Motzko.

"You could tell there were some nerves in the first period, but after the guys settled in we found our style of play and got the job done. We'll learn from this as we get ready for the next one."

Keller scored his second of the game with 7:41 to play in the third. Jeremy Bracco added another at 17:31 while Jordan Greenway got on the scoreboard in the final minute of regulation time.

Troy Terry and Tage Thompson each chipped in with two assists for the U.S. White also had an assist for a two-point outing.

American goalie Tyler Parsons only had to make 11 saves for the victory. Marek Mitens stopped 24-of-30 shots for Latvia.

The U.S. has Tuesday off while Latvia play Russia. The next game for the Americans is Wednesday against Slovakia.