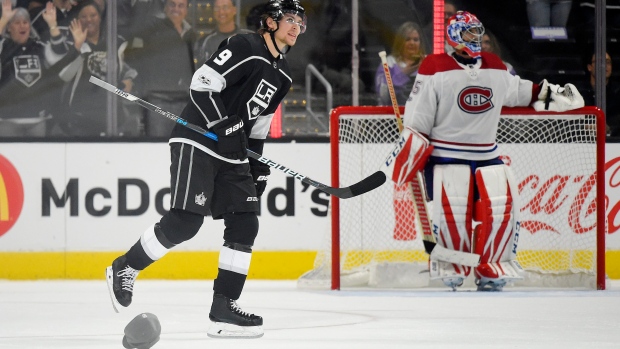 LOS ANGELES — Adrian Kempe and Michael Cammalleri had quite the chemistry on a line with Trevor Lewis.

Kempe had his first career hat trick to lead the Los Angeles Kings to a 5-1 victory over the Montreal Canadiens on Wednesday night, giving them their best six-game start (5-0-1) in franchise history.

Cammalleri, a healthy scratch the previous two games, scored twice and the line finished with 10 points and a bunch of hats on the ice.

"Obviously, it's huge. I'm really excited for that," Kempe said. "Most importantly, the team won. We started to play better and better after the first couple of periods. The third period really showed the better team on the ice. We scored on our opportunities."

Jonathan Quick made 36 saves for the Kings.

"Obviously it's exciting to see any player get a hat trick in a game," Kings coach John Stevens said. "We've liked his skill and speed. He looks like a guy who should be able to score. To see him have success at this level is terrific, especially when the team needed him at this level. The line with Cammalleri, Adrian and Lewy, once they got together they seemed to have good chemistry."

The game was tied heading into the third period before the Kings scored four times.

"When you're in a hockey game like we were after two periods, you have to be smart," Montreal coach Claude Julien said. "You have to make the right decisions, and we didn't do that. There's accountability that comes with that. We need to be better and a lot smarter in those situations if we're going to turn this around and win some hockey games. The risks we took were unacceptable."

Paul Byron scored his first goal of the season midway through the first period, capitalizing on Derek Forbort's turnover, to give the Canadiens a 1-0 lead.

On his first goal, Cammalleri batted the puck out of the air to score on a power play and tie the game at 1 in the first period. It was Cammalleri's first goal of the season and first goal as a King since 2008. The 35-year-old Cammalleri is in his second stint with the Kings. He scored the second goal midway through the third period.

"It's been one of those things where we've been working on it together over the last couple of weeks," Cammalleri said. "Sometimes when you get a little bit of a result it adds to the conviction."

Al Montoya made his first start of the season in goal for the Canadiens. He played well but there were plenty of mistakes made in front of him.

"This is tough right now," Montoya said. "You're in the game the whole game until the last 10 minutes and you get blown out like that. This is a tough one to swallow."

Alex Galchenyuk started on Montreal's top line with Max Pacioretty and Jonathan Drouin. He was called for two penalties in the first period, an illegal check to the head and slashing. The latter led to the Kings' power-play goal by Cammalleri.

The Canadiens last won on Oct. 5 in overtime.

Jeff Carter sustained a lower body injury after a collision near the end of the first period and didn't return.

"Any time a player doesn't finish a hockey game there's concern, obviously," Stevens said. "Once we get a further evaluation, (we'll) inform the media of what we're dealing with and move on from there."

Canadiens defenceman David Schlemko had surgery Wednesday to remove a bone fragment in his right wrist and is expected to miss 3-4 weeks ... Right winger Justin Augler, 23, made his NHL debut for the Kings on Wednesday ... "It was Hockey Fights Cancer Night" in Los Angeles and the Kings auctioned their purple jerseys used in warmups online to benefit the cause ... It was also "Ontario Reign Night," the American League Hockey franchise of the Kings. Reign players were in attendance and shown on the JumboTron.

Canadiens: Finish their three-game road trip by playing the Ducks on Friday in Anaheim.

Kings: Head out on their longest trip of the season, a six-game, 11-day trek that starts Saturday in Columbus and ends in St. Louis.