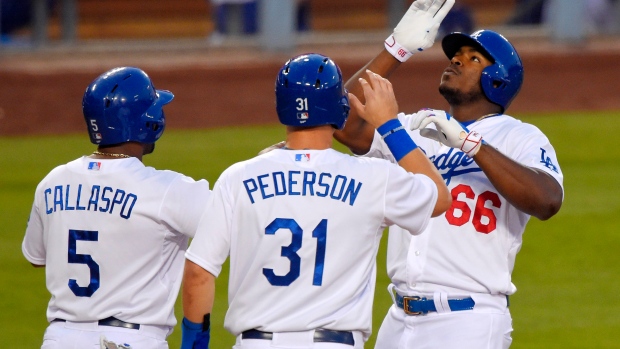 Los Angeles, CA - Yasiel Puig went 4-for-4 with a three- run homer and scored the game-winning run on Howie Kendrick's base hit in the ninth inning as the Dodgers eked out a 7-6 win over the Diamondbacks to complete a three-game sweep.

Kenley Jansen (1-0) blew a save opportunity in the top of the ninth when A.J. Pollock crushed the first pitch he threw into the left-field bleachers for a solo homer.

Jansen's teammates picked him up in the home half, which began with a pair of walks to Puig and Adrian Gonzalez. Kendrick followed with an opposite-field single off Daniel Hudson (1-2) for the dramatic walk-off win.

Yasmani Grandal added a solo homer for the Dodgers, who used five relievers behind an ineffective Brett Anderson.

A string of four consecutive quality starts for Jeremy Hellickson came to a crashing halt. Arizona's starter did not make it out of the fourth having allowed five runs on six hits and two of walks.

Paul Goldschmidt nearly mirrored Puig with four hits and a two-run homer, and Yasmany Tomas homered and drove in a pair in the club's fourth straight loss.

Tomas' long RBI single in the first inning accounted for Arizona's first run, and the rookie had a potential three-run homer robbed by Joc Pederson after the Dodgers went ahead with a four-run second inning.

With runners on the corners, Anderson placed a perfectly-positioned bunt down the third-base line that plated Andre Ethier, and Puig hit a three-run blast to straightaway center for his first round-tripper since coming off the disabled list last weekend.

Grandal tacked on a solo shot in the third off a similar pitch that Puig launched into the stands -- a two-seam fastball from Hellickson that tailed over the heart of the plate.

The Diamondbacks cut into the 5-1 deficit in the fifth when Goldschmidt smacked his 100th career homer with a runner on, and Tomas followed with his second of the year.

The Dodgers' bullpen wiggled out of a first-and-third, one-out jam in the sixth, and each team traded sacrifice flies -- one from Enrique Hernandez for LA and Chris Owings for Arizona -- to keep it a one-run game.

The Dodgers have five series sweeps this season, two over Arizona ... LA leads the season series 7-2 ... Anderson allowed four runs on eight hits over five innings ... Puig has gone 9-for-15 (.600) with six doubles and a homer since coming off the DL ... Pollock finished with three hits ... The Dodgers have won nine straight home games for their NL West rivals.