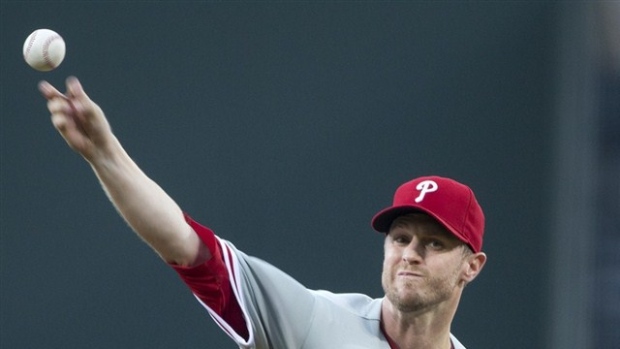 MIAMI - This time when the game ended, the only gesture from Jonathan Papelbon was a fist pump.

Papelbon, pitching for the first time since he grabbed his crotch and received a seven-game suspension, earned his 38th save with a scoreless ninth inning Wednesday to help the Philadelphia Phillies beat the Miami Marlins 2-1.

The game was Papelbon's first since he blew a save against the Marlins on Sept. 14 and lost his composure when he was booed coming off the field. He grabbed himself in response, and then bumped umpire Joe West.

"It has been boring, it has been aggravating," Papelbon said. "I play the game because I want to get in there as many nights as I can. It has been rough. It has been bad. I just really had to try to put Joe West in the back of my mind and carry on, even though I feel like I got the raw end of the deal."

Papelbon saved the game for Kyle Kendrick, who pitched perhaps his final game for Philadelphia. Kendrick (10-13) went seven innings, had three hits and drove in a run.

Kendrick can become a free agent after the season but would prefer to remain with the Phillies.

"After I was done in the seventh, I soaked it up a little bit and looked around," he said. "I've been with these guys through a lot. It was a little emotional, I'm not going to lie. I don't like change. If it happens, I'll deal with it."

Using teammate Ryan Howard's bat for the first time, Kendrick broke a scoreless tie with two outs in the seventh when he doubled home Darin Ruf. Kendrick also singled twice and hiked his average from .095 to .136.

The right-hander allowed only one run despite giving up five extra-base hits. Papelbon pitched around a one-out double in the ninth, striking out Enrique Hernandez to end the game.

On an 84-degree night, the retractable roof at Marlins Park was open for the first time since May 23. The sultry weather seemed to suit both starting pitchers.

Miami's Brad Hand allowed one run in seven innings. Marlon Byrd put the Phillies ahead to stay when he hit a one-out RBI single in the eighth off Chris Hatcher (0-3).

Since losing slugger NL home run leader Giancarlo Stanton to a season-ending facial injury, the Marlins have scored less than three runs in nine of 12 games. They have one home run in the past nine games.

"We're having a tough time scoring," manager Mike Redmond said. "We had some guys in scoring position and couldn't get a couple of hits to score some runs. That's the way it's been going since we lost G."

Phillies: SS Jimmy Rollins has not run all-out to test the sore left hamstring that has sidelined him since Sept. 8, and it's uncertain whether he'll play again this season.

LHP Andrew Heaney (0-3, 5.33), the Marlins' top prospect, will pitch the second game of a doubleheader Friday at Washington. It will be Heaney's first start since July 5.

Papelbon said he's looking forward to pitching in Philadelphia this weekend even though he expects fans will jeer him.

"I enjoy pitching there," he said. "I don't let the boos get to me. They don't bother me. I don't hear them. I like pitching in that kind of environment."