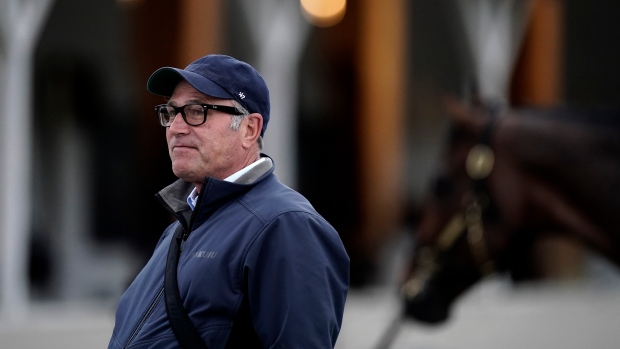 ARCADIA, Calif. (AP) — Tim Yakteen has been to the Kentucky Derby with good horses before. Now the trainer is at Churchill Downs in charge for the first time with two top contenders that used to be trained by Hall of Famer Bob Baffert.

Yakteen worked two different stints earlier in his career as an apprentice under Baffert, who won’t be at the Derby on Saturday because he’s serving a 90-day suspension imposed by Kentucky racing officials. The six-time Derby winner also has been banned for two years by Churchill Downs Inc.

It may seem uncomfortable to most everyone except Yakteen.

“I wouldn’t say that I think that there’s any awkwardness there,” he said. “I just feel really lucky and fortunate.”

A surprised Yakteen took calls from the owners of Messier and Taiba asking him to train their budding stars.

“I was honored they had the confidence that I could continue to carry the torch,” he said, perched on a trunk near Messier’s stall in his Santa Anita barn.

Baffert relinquished the colts to serve the punishment handed down after last year’s Derby winner, Medina Spirit, tested positive for an anti-inflammatory medication that isn’t allowed on race day.

Baffert’s suspension bars him from Santa Anita and Yakteen said they’ve had no conversations since he took charge of Messier, the early 8-1 third choice in the Derby, and Taiba, a 12-1 shot.

Taiba is owned by Amr Zedan, who campaigned Medina Spirit before that colt died in December after a workout at Santa Anita.

Yakteen has about 30 horses of varying abilities in his barn. Adding Messier and Taiba has provided a jolt of positive energy, he said.

“I have never, ever woken up and not wanted to go to work,” he said. “I enjoy it tremendously.”

Yakteen’s career highlights include four Grade 1 stakes victories, including Taiba in the recent Santa Anita Derby, and an Eclipse Award for champion sprinter Points Offthebench. He has over 250 career victories and purse earnings of over $12 million.

Hall of Fame jockey Mike Smith will ride Taiba in the Derby, having successfully teamed with Yakteen in California.

“He’s one of those guys you feel confident when you ride for him,” Smith said. “He’s been around long enough. I think he’ll be great.”

Yakteen was raised in Germany, where his Lebanese father was stationed with the U.S. Army after becoming an American citizen.

He moved to the U.S. at age 18 in 1982, joining a sister who lived next to Los Alamitos racetrack in Cypress, California. He attended the races for the first time and was hooked.

“That night was electrifying and it’s been with me ever since,” he said.

He got a day job at the track working in publicity, group sales and marketing. At night, he’d watch the races.

It wasn’t long before Yakteen made his way to the stable area, offering to work for free filling water buckets and mucking stalls. He took up living in a tack room.

“I enjoyed every aspect of it,” he said. “I had a goal that I wanted to be part of the industry.”

After starting with harness horses, Yakteen got hired by a white-haired quarter horse trainer named Baffert, who had left Arizona to chase his own dream. When Baffert switched to thoroughbreds in 1988, Yakteen stayed with him.

A few years later, Yakteen was in the racing office at Santa Anita when he crossed paths with Hall of Fame trainer Charlie Whittingham, who said hello.

He joined Whittingham’s stable as an assistant. By 1994, Yakteen was at his first Kentucky Derby helping with second-place finisher Strode’s Creek.

Two years later, he and Whittingham returned with a Derby runner. At the same time, Baffert was finishing second with Cavonnier in his first Derby.

In 1997, Yakteen returned to Baffert’s barn and for the next seven years he was part of the team that worked with back-to-back Kentucky Derby winners Silver Charm and Real Quiet and 2001 Derby champion War Emblem.

Having learned patience and the ability to read a horse’s subtle signs from Baffert and Whittingham, Yakteen opened his own stable in 2004.

By then, he had married Millie Ball, an exercise rider for Baffert. She’s now a host and reporter for digital horse racing network XBTV.

The couple’s two sons, 16-year-old Sam and 14-year-old Ben, will be at home “pouting” about missing the Derby because of school, Yakteen said.

What happens after the Derby is up in the air.

Yakteen said there’s been no discussions about whether Messier and Taiba will stay in his barn. Baffert’s suspension runs through July 2, keeping him out of the Preakness on May 21 and the Belmont on June 11.

“I’m keeping my fingers crossed that if we have a successful campaign that will be a realistic opportunity,” Yakteen said.

At 57, Yakteen knows the huge odds a trainer faces in getting one horse to the Kentucky Derby. And he’s got two.

“It’s like having a lottery ticket sort of fall in your lap,” he said. “Now we’re trying to cash it.”