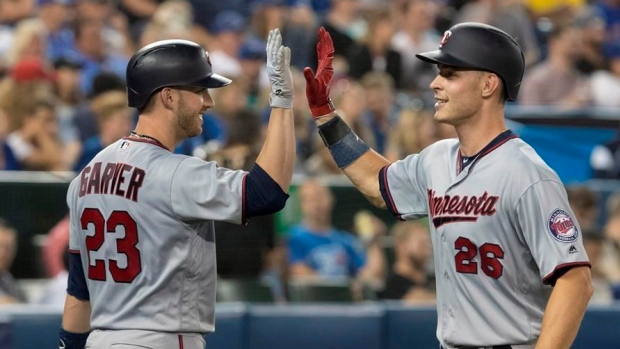 TORONTO — With the Blue Jays lacking a starter for Monday night's game, manager John Gibbons hoped to find an answer in his bullpen.

The end result wasn't quite was he was looking for, but Gibbons did see a glimmer of hope in three scoreless innings from Jaime Garcia to close out the game.

"I tip my hat to him," Gibbons said following an 8-3 loss to the Minnesota Twins in the opener of a three-game series. "He really saved us late there so we didn't have to use some other guys.

"That's as good and under control as I've seen him this year. He looked really relaxed and everything was smooth. ... We liked what we saw, that's for sure."

Garcia retired nine straight batters, striking out three, over the seventh to ninth innings. And he needed just 28 pitches to do it.

The 32-year-old left-hander, who missed three weeks of the season with shoulder inflammation from June to July, had pitched just 2/3 innings of relief in Boston before the all-star break since returning from the disabled list.

A starter throughout his career, Garcia said he's comfortable with a bullpen role.

"One of the things I've learned through my career is literally adapt to any situation that comes my way and whatever the circumstances are," he said. "My mentality is just stay focused and execute pitches when it's my time to take the mound, whether it's starting or bullpen.

"That's been the case right now. I've been trying to do my best to learn from the other guys in the bullpen. At the end of the day when I go out there I can pretty much adapt to whatever's in front of me, whatever they need me to do."

Max Kepler hit a two-run homer and Logan Morrison added a solo shot and drove in three to lead Minnesota's offence. Eduardo Escobar drove in a pair for the Twins (45-53), and Joe Mauer was 3 for 5 with an RBI.

Adalberto Mejia (1-0) allowed one run and eight hits over 5 1/3 innings while striking out three and walking two.

The Blue Jays (46-53) tried to rally in the ninth, scoring two on a Yangervis Solarte sacrifice fly and Kendrys Morales single but the comeback fell short.

Lourdes Gurriel Jr. was another bright spot for Toronto, going 2 for 4 with a homer to extend his multi-hit streak to six games. The last Toronto rookie to record two-plus hits in six consecutive games was John Olerud in 1990.

"I've been working hard trying to do everything well," Gurriel said through a translator. "Things are going well for me now and hopefully it's going to stay that way."

Luis Santos (0-1) pitched two innings in his first major league start and allowed three hits and a run, walked a batter and struck out three.

The Twins got to the 27-year-old right-hander early — and were helped by a couple of miscues from Teoscar Hernandez in left field — as Mauer led off the first with a double and scored on Escobar's triple for a 1-0 Minnesota lead.

Morrison tacked on two runs in the third with a single off Tim Mayza. His fifth-inning homer off Joe Biagini gave Minnesota a 6-1 lead before Kepler sent a pitch over the right-field wall to plate two more.

The Twins also scored twice in the fourth with base hits from Mauer and Escobar.

"We got what we actually wanted out of Santos, then they got to us," Gibbons said. "We put that run on the board and they opened it up. ... A lot of hits but not too many runs tonight. We left a lot of guys on base."

Gurriel, starting at shortstop and batting second in the lineup, put Toronto on the board with a solo shot in the third inning. The 24-year-old Cuban has at least one hit in each of his last 12 starts.

The Blue Jays loaded the bases with consecutive singles in the sixth but a pair of strikeouts and a fly out ended the threat.

The Blue Jays held a moment of silence before the game for victims of Sunday's deadly mass shooting in Toronto's Greektown neighbourhood.