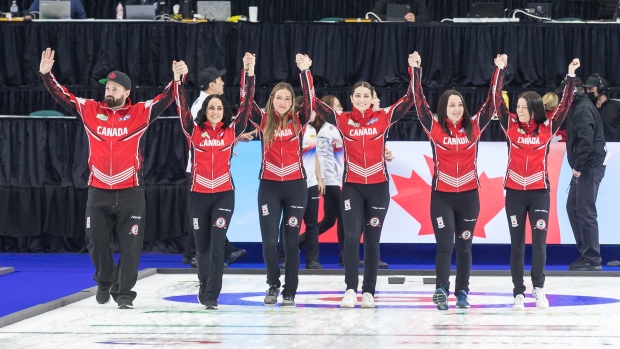 PRINCE GEORGE, B.C. — With international curling medals more elusive for Canada than they once were, Kerri Einarson claimed bronze Sunday at the women's world curling championship.

Einarson edged Sweden's Anna Hasselborg 8-7 in an extra end to get the host country on the podium at the CN Centre.

After a late-game letdown in a semifinal loss to Kim the previous evening, Einarson finished the job against Hasselborg, who won Olympic gold in 2018 and ranks No. 3 in the world.

"We came here for gold, but we're coming home with something, so that's pretty special," Einarson said.

An unprecedented number of Canada's elite curling teams have broken up and reformed in recent weeks following last month's Olympic Games in Beijing, but Einarson vows her foursome out of Manitoba's Gimli Curling Club will carry on as is.

"We are definitely staying together," the skip said. "Why break something that isn't broken?"

Einarson wasn't able to wear the Maple Leaf in the 2020 world championship in Prince George. That event was cancelled because of the COVID-19 pandemic.

Einarson posted a 9-3 record in the preliminary round this year to earn the third playoff seed behind Switzerland (12-0) and South Korea (9-3).

"Every opportunity we get here at worlds, it almost feels a little easier," the skip said. "I know last year, we felt a lot of pressure."

Her team competed in the first world curling championship held with spectators since 2019. Attendance at the 6,000-seat venue averaged just 1,500 per draw.

The virus continued to impede the 2022 women's event, however. Scotland withdrew from the 13-country field on the second day because four players tested positive.

Japan played its 10th game with three players and withdrew from its last round-robin game due to COVID-19 concerns.

"It's been amazing to be here in front of this crowd," Hasselborg said. "We have to admit it's been weird to have an open event like this when COVID is still around us.

The World Curling Federation booted Russia, the runner-up in Calgary, from the tournament because of that country's invasion of Ukraine last month.

"If there's anything I learned over the last two years, it's perspective," Birchard said. "I think that was key after last night's loss coming into this game, but I think we're just so grateful to be able to play with everything that's going on in the world right now."

Tirinzoni joined Jones and Homan in skipping their teams to unbeaten records through the round robin and the playoffs.

"Canada hasn't got a medal at the worlds in a while, so it's really cool to get that medal for us," Meilleur said. "It was a hard field and a really hard grind of a week."

One bronze medal in team curling in the last two Winter Olympics also indicates the rest of the world has caught up in a sport where Canadians on the podium was once a regular occurrence.

Canadian teams run a domestic gauntlet of some of the world's top teams to wear the Maple Leaf internationally.

By contrast, Scotland hand-picks a pool of curlers from which to choose a national team.

Sweden's Hasselborg and five-time world champion Niklas Edin are essentially full-time curlers whose teams have the full weight of their federation's resources behind them.

"I hope we never get to the point where it's a selection system in Canada,' said Einarson's coach Reid Carruthers, who is a national-level curler himself.

"That would just take away from getting to wear this logo on my chest. This is such an honour because we've earned the right to come here."

Sandviken, Sweden is the host city of the 2023 women's world championship.