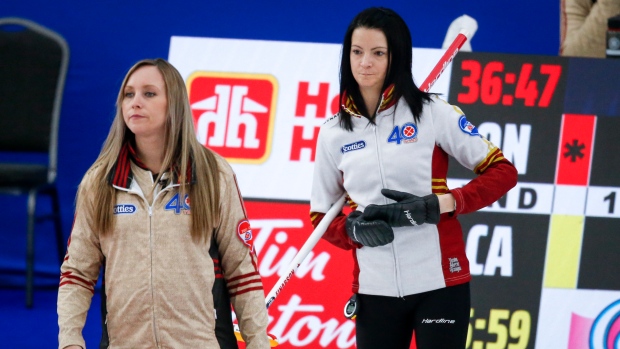 CALGARY — The host province's run at the Canadian women's curling championship fell just short of the final when Alberta's Laura Walker bowed out to Kerri Einarson in Sunday's semifinal.

Einarson, the defending champion, advanced to the evening's final against Ontario's Rachel Homan with a 9-3 win over Walker.

Walker's foursome rode a six-game winning streak into the semifinal, including a 9-8 victory over six-time champion Jennifer Jones of Manitoba in Sunday morning's tiebreaker.

But Walker, Kate Cameron, Taylor McDonald and Rachel Brown out of Edmonton's Saville Sports Centre were overpowered in the semifinal by Einarson, who scored three points in the sixth and eighth ends.

Walker shook hands after the eighth. Her team ends

"Feeling a little bit of everything right now I guess," Walker said. "I'm really proud of my team. Our backs were against the wall for six or seven games. We just ran out of steam today."

Walker was among the provincial and territorial reps hand-picked by their associations because the COVID-19 pandemic caused the cancellation of playdowns.

When Curling Canada transferred four of its main events to a spectator-free, controlled environment at WinSport's Markin MacPhail Centre in Calgary to prevent the spread of the virus, Walker inherited the mantle of host province for this year's Scotties Tournament of Hearts.

Her team curled without fan support in the building, however.

Walker went 3-4 and didn't make the championship round in her Hearts debut last year in Moose Jaw, Sask.

Brown filled in at lead in Calgary for Nadine Scotland, who is pregnant and opted out of this year's Hearts.

Walker went unbeaten in the championship round for a 9-3 overall record, which put Alberta in the hunt for the title on the final day of the tournament.

"I think what we learned this year is some grit and how to win games when we're not playing that well and that's maybe what we were missing last year," the skip said.

"We got behind the 8-ball in a couple of our games last year and couldn't quite generate our multiple (points) or really hang in there the same mentally, so I think that's probably where we made the biggest strides."

Walker's husband Geoff, already in the bubble helping his wife care for their five-month son at the tournament hotel, plays lead for the Brad Gushue team attempting to defend their Tim Hortons Brier title in Calgary.

No positive tests for the virus were reported at the Tournament of Hearts as of Sunday.

"Curling Canada just did an incredible job," Walker said. "They put everything out there to make this happen. We were completely safe the whole time.

"The men have something to follow up on here. They know it works. The system works, so if something happens from here on out, it ain't us."

This report by The Canadian Press was first published Feb. 28, 2021.