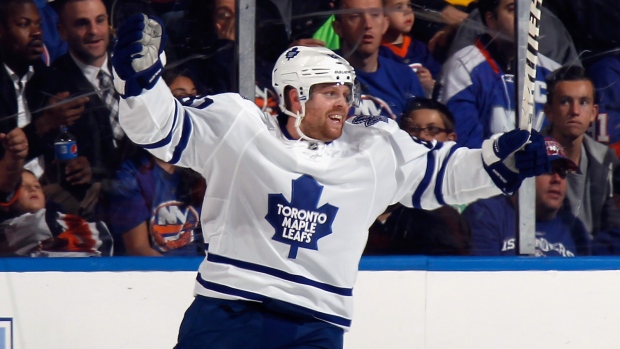 UNIONDALE, N.Y. - According to James van Riemsdyk, his linemate Phil Kessel was this close to discarding his sticks.

The New York Islanders may wish the high-scoring winger went through with it, as Kessel scored two goals to lead the Toronto Maple Leafs to a 5-2 win Tuesday night.

Roman Polak, van Riemsdyk and David Clarkson also scored goals for Toronto (3-3-1), which has earned points in four of its last five games.

Nick Leddy and John Tavares scored for New York (4-2-0), which lost its second game in a row Jaroslav Halak allowed five goals on 23 shots before being replaced by Chad Johnson at the start of the third period.

Toronto turned a 2-1 deficit at the start of the second period into 5-2 advantage by intermission, as the Leafs peppered Halak for four goals on 13 shots.

Kessel started the offensive onslaught at 9:04 of the second with his third of the season which tied the game 2-2.

Polak gave Toronto its first lead of the game 2:07 after Kessel's goal with his first as a Leaf. Santorelli and Daniel Winnik set up the go-ahead goal by controlling the puck behind the goal line before Polak scored his 14th career goal in 431 games.

Clarkson pushed the advantage to 4-2 with 3:39 remaining in the period with a snap shot from the high slot that Halak couldn't glove. Kessel scored his second of the period 92 seconds later causing the 11,408 in attendance to boo the Islanders off the ice.

"In (the) second we got back to working," Clarkson said. "(We) took the puck in their zone and started cycling, making plays. We were better in our own zone. The difference in the game was the second.

"We'll take the positives from that."

As dominant as Toronto was in the second period, the Islanders were their equals in the opening 20 minutes.

Leddy opened the scoring just 2:48 into the game as he walked down the slot before beating Bernier with a wrist shot.

But the Islanders went ahead 2-1 on Tavares' power play goal at 15:02. The New York centre one-timed the rebound of Johnny Boychuk's point shot, which had ricocheted off the backboard, past Bernier.

NOTES: The Islanders will introduce their new owners, Jonathan Ledecky and Scott Malkin, in a press conference Wednesday afternoon at the Nassau Coliseum. Ledecky and Malkin will spend the 2014-15 and 2015-16 seasons as the franchise's minority owners, then transitioning into the majority owners starting in 2016-17. ... Toronto announced the hiring of Mark Hunter as the Director of Player Personnel in a statement Tuesday morning. "I am very excited about joining the Toronto Maple Leafs organization," said Hunter, who stepped down from his role as owner, Vice-President and General Manager of the Ontario Hockey League's London Knights to take the position with the Leafs. "I am grateful for the opportunity that has been given to me by (Maple Leafs President) Brendan Shanahan, (General Manager) David Nonis and the entire management team. I would like to thank the London Knights organization for 12 great years. I am looking forward to the start of a new chapter in Toronto."