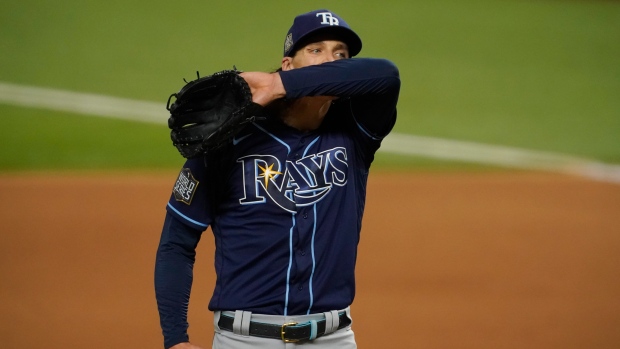 Cash told reporters after the game he thought Glasnow, who threw a career-high 112 pitches and allowed six earned runs, could have kept the Rays in the game during a pivotal fifth inning.

“He had plenty of stuff to keep us right there,” Cash told reporters. “The walks are definitely not ideal. Glas would be the first to recognize that. We didn’t do a good job holding the runners on. We can’t let them get the double steal right there.”

After cruising through the first three innings, Glasnow allowed a two-run home run to Cody Bellinger in the fourth. He then walked Mookie Betts and Corey Seager to begin the fifth inning with his pitch count climbing but Cash elected to leave his hard-throwing right-hander in against Max Muncy. What happened next was ugly as L.A. pulled off a double steal and then scored runs on the next two hitters. Glasnow was eventually lifted for Ryan Yarbrough, who allowed two more hits in the inning for two additional runs, both of which were charged to Glasnow.

Glasnow said he felt "relatively good" and thought his adrenaline could carry him through the fifth inning.

"Any pitcher at the end part of the [start], you want to be left in. That's the competitive nature ... I think the adrenaline takes over. When I go to 100 pitches, I don't feel the fatigue that much," he said.

“I think ultimately it was kind of a lack of strikes thrown right here,” Cash said. “That’s not ideal, especially against an offence like this that can really capitalize on the free passes.”

The Rays have had a quick hook on starting pitchers all season, making Tuesday's move atypical.

According to ESPN, Tampa Bay ranked third in baseball in innings pitched from the bullpen during the season and were first in stranding runners.

On the other side, Clayton Kershaw turned in six nearly flawless innings, allowing only one run on two hits and eight strikeouts.

Game 2 of the World Series will go Wednesday night from Arlington, Texas, with Tony Gonsolin taking the ball for Los Angeles and Blake Snell getting the start for the Rays.