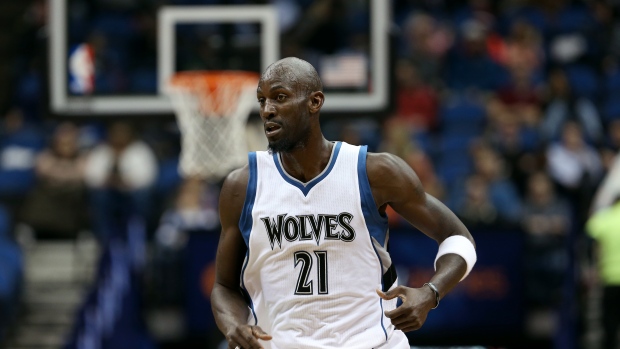 Long-time Minnesota Timberwolves great Kevin Garnett says he will "not entertain" the retirement of his iconic No. 21 because of a dispute with T-Wolves majority owner Glen Taylor.

Garnett told Shams Charania of The Athletic that he has not forgiven Taylor after a tense end to his second tenure with the team in 2016.

"Glen knows where I'm at. I'm not entertaining it. First of all, it's not genuine. Two, he's getting pressure from a lot of fans and, I guess, the community there," Garnett said. "Glen and I had an understanding before [former team president] Flip [Saunders] died, and when Flip died, that understanding went with Flip.

Garnett played with the Timberwolves from 1995 to 2007 and then again in 2015 and 2016. Garnett said he and Saunders talked about potentially becoming a minority owner once his playing career ended. When Saunders died of lymphoma in October of 2015, Garnett says he felt Taylor went back on plans previously discussed.

"My years in Minnesota and in that community, I cherish," Garnett told Charania. "At this point, I don't want any dealings with Glen Taylor or Taylor Corp. or anything that has to do with him. I love my Timberwolves, I'll always love my guys, I'll always love the people who f--- with me there. I'll always have a special place for the city of Minneapolis and the state of Minnesota in my heart.

"But I don't do business with snakes."

Garnett is the franchise's all-time leader in points, rebounds, All-Star appearances and games played. He averaged 19.8 points and 11.0 rebounds over his 14 seasons in the Twin Cities.