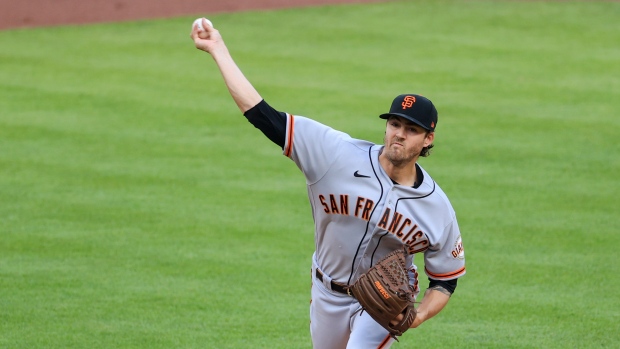 TORONTO — This isn’t the first time Ross Atkins has blown up Kevin Gausman’s line when the time was right.

Since December of 2019, the Toronto Blue Jays GM has been hot on Gausman’s tail, tabling everything from reclamation project deals to the lucrative $110-million package that finally lured the right-hander and his dominant splitter north of the border this week.

For Atkins and the Jays, the third time was the charm.

“To be honest, I had a feeling that Ross was going to call again, even though they might have not wanted to,” Gausman joked as he was introduced by the club via Zoom on Wednesday afternoon. “But we almost reached a deal two years ago and even last year, too. It was kind of a matter of, ‘I think they’re going to call again.’”

In fact, he couldn’t wait to pick up that phone and dial up Gausman for the third off-season in a row.

He called in 2019 after Gausman had been non-tendered by the Cincinnati Reds coming off a career-worst season, and then again a year ago with a three-year offer in the neighbourhood of $40 million.

“I couldn’t wait to call Brodie on Day 1 of free agency about Kevin and, obviously, we’ve talked for a long time about him and we did come close a couple of times prior to today,” Atkins said.

Gausman and Scoffield played their hand perfectly, accepting last year’s $18.9-million qualifying offer before authoring a career year and simply sitting back and waiting for the offers to roll in over the last three weeks.

Based on his pedigree, age, career-long track record of health and recent track record of performance, the 30-year-old Gausman is an excellent bet to continue providing a top-of-the-rotation presence and the numbers to go along with it.

In many ways, he’s similar to Robbie Ray, a two-pitch starter who’s needed some time to truly figure things out.

After posting a 4.22 ERA across his six inconsistent seasons with the Baltimore Orioles, Gausman returns to the American League East as a much different pitcher.

“I think it’s a long list to be honest,” Gausman said when asked how he’s changed. “I think I’m overall just a lot smarter, know myself a little bit better, better mechanics, more repeatable mechanics. I just feel like I’m not trying to be somebody that I’m not.

“Going back to the AL East, it’s a division I spent a lot of time in early in my career and I know how great of a division it is. Playing the Yankees, playing in Fenway against Boston, and now with the team that Tampa’s had the last couple years, I truly believe it's the best division in baseball and obviously hitters ballparks. It’s an exciting time for me to go back there and take everything I’ve learned over the last couple years and go back into a division I know very well.”

While it was the obvious low point statistically, the 2019 season was also where the change started.

Traded from the Orioles to the Atlanta midway through the 2018 campaign, Gausman struggled to begin 2019, posting a 6.19 ERA in 16 starts before the Braves cut bait and he was waived.

Gausman finished the season toiling away in the Reds bullpen, but the different voices in his ear that year helped lay the foundation.

The Braves told him to stop throwing his fastball down in the zone, while the advice from the Reds was to ditch his third pitch, a slider, and focus on his four-seam fastball/splitter combo.

“That was a big lightbulb for me,” Gausman said of the Atlanta change.

The pitch mix and approach changes have been the catalyst for Gausman’s breakout and transformation into the top-of-the-rotation stud many envisioned when the O’s drafted him fourth overall back in 2012.

“When I signed with the Giants it was, ‘We want you to do just what you’ve been doing with the Reds as a reliever, but as a starter,’” Gausman said.

When Gausman was an Oriole, he was throwing his splitter about 20 per cent of the time and mixing in the slider at about 10-15 per cent.

Last year, Gausman’s splitter usage peaked at 35.3 per cent, while he needed the slider just 5.9 per cent of the time.

“Over my career, (the splitter’s) just continued to get better and my feel for it gets better,” Gausman said. “It’s a huge pitch for me and it took me a long time to really realize how big of a pitch it is for me, but I’m definitely [happy] that my (junior varsity high school) coach showed it to me all those years ago.”

The Colorado native, who will wear Roy Halladay’s Philly No. 34 with the Jays, chose Toronto with the belief he’ll be able to win.

It’s very clear the Jays’ pitch of big money and winning is resonating with free agents.

“Honestly, one of the biggest factors for me at this point in my career is I want to go somewhere and win,” Gausman stated. “I want to win a championship and that’s really my goal now. Listen, I was on the best team in baseball all year last year and we had the best winning season in franchise history, but didn’t get the job done. For me, that kind of left a bad taste in my mouth and I’m hungry for that. As a player looking on the other side and taking a step back, there’s a lot of youth here and a lot of guys who are going to be here under team control for a long time and a very talented group, too. So, you know, I felt like out of all the other teams that were involved, I felt like this was the best place to go and win now and in the future.”

“I’ve seen Rogers Centre at full capacity and when the team is electric the whole city is vibrant and really behind the entire team,” he recalled. “I’m really looking forward to that.”