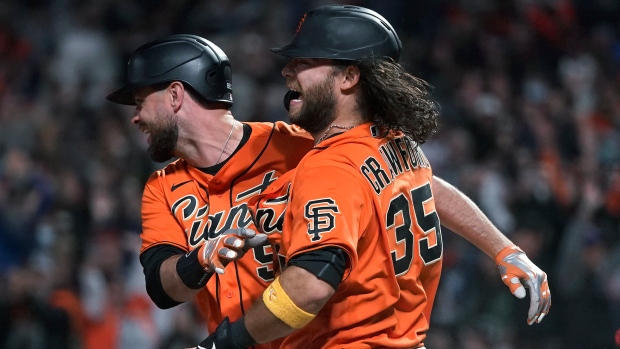 The Giants, saved when Donovan Solano came off the COVID-19 injured list and connected for a tying, pinch-hit home run with two outs in the ninth, moved two games ahead of the Los Angeles Dodgers in the division race.

Atlanta had its NL East lead trimmed to two games over Philadelphia.

The Giants were out of position players when Gausman, a career .184 hitter, stepped up for reliever Camilo Doval, who had never batted in his pro career.

Gausman hit a flyball to shallow right field and Brandon Crawford beat the throw home with a head-first slide. Gausman's teammates chest bumped him and cheered near first base a day after the right-hander took his first defeat since July 30.

Crawford began the final inning at second base and advanced on a wild pickoff throw by Jacob Webb (4-3), who then intentionally walked Evan Longoria. With one out, Solano was walked to load the bases.

Tyler Matzek had retired Crawford on a grounder with two outs in the 10th and the bases loaded.

Down 4-2, the Braves rallied in the ninth when Travis d'Arnaud hit a go-ahead, three-run homer. Austin Riley and Adam Duvall hit consecutive singles to start the inning against Tyler Rogers and d'Arnaud connected one out later.

Solano homerd off former Giants reliever Will Smith, who blew just his sixth save.

Brandon Belt hit a two-run homer, Crawford also connected and LaMonte Wade Jr. had a splash homer for the Giants.

San Francisco starter Logan Webb struck out nine and didn't walk a batter, allowing two runs on six hits. He was in position to win his 10th consecutive decision dating to a May 5 loss at Colorado.

The Braves had won six of the last seven in San Francisco, where they played for the first time since May 2019.

Atlanta's last 10 losses have been by two or fewer runs.

The Giants have homered in a season-high 12 straight games dating to Sept. 5 -- 26 total during that span -- for their longest such streak since doing so in 13 consecutive games from June 25-July 12, 2019.

Braves: Atlanta's scheduled series finale with Colorado on Thursday was rained out, giving the Braves a head start traveling cross-country to the Bay Area. Manager Brian Snitker hoped that might benefit everybody but particularly his bullpen. "It's not going to be a bad thing having that day off," he said.

Giants: Reliever Jake McGee was placed on the 10-day injured list with a strained right oblique muscle that he felt earlier in the week while warming up in the bullpen. The next day McGee still felt it when playing catch and a scan was ordered that revealed the strain. "It wasn't something that was causing him severe discomfort," manager Gabe Kapler said. ... OF Mike Yastrzemski missed a third straight start after being hit by a pitch on the right elbow Tuesday against San Diego. ... RHP Johnny Cueto (strained pitching elbow) played catch out to 90 feet with the hope he will throw live batting practice Sept. 27th or 28th and he could potentially pitch before the regular season ends. ... OF Alex Dickerson (right hamstring strain) still needs some minor league rehab at-bats before being activated.

LHP Alex Wood (10-4, 4.08) will pitch Saturday in his first start for San Francisco since Aug. 26 as he makes his return from a bout with COVID-19. While he is still regaining his energy, Wood hopes to work deep into the game, saying "we're just going take it inning by inning and see how it goes."

"Get back in, have a few before the playoffs and be ready to go," Wood said. "Just happy to be back and be able to give us a chance to win."

The Giants have been forced into two bullpen games a week ---- and Kapler said "it's possible that kind of an end is in sight with the challenges of running several bullpen games on a weekly basis."