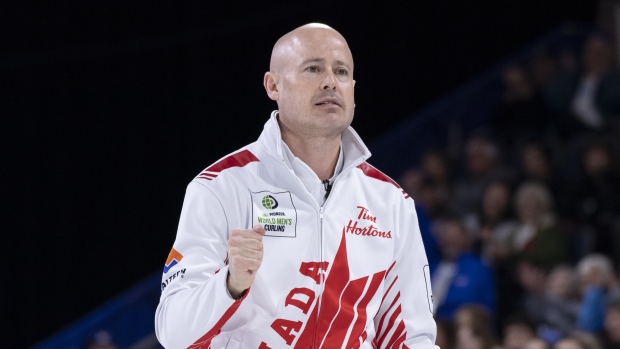 KINGSTON, Ont. – Kevin Koe isn’t thinking about what a victory at the Tim Hortons Brier this week means to the curling history books. He just wants to win – again.

The 45-year-old will skip Team Canada after running the table in Brandon, Man., last year to capture his fourth career Canadian championship. If he defends the title at Leon’s Centre, Koe will be become the first skip in history to win five Brier Tankards. Teammate Ben Hebert would join him at five championships, the first lead and third curler overall to accomplish the feat.

Only Randy Ferbey, who won four times as a skip and twice as third, has more career national titles with six. Ferbey, Kevin Martin, Ernie Richardson and Koe are the only skips with four.

Koe says he might think about making history off the ice, but those thoughts don’t cross his mind in the slightest when it’s game time.

“Not at all. It’s so hard to win. It’s pretty neat to look back. It wasn’t that long ago when I won my first and to have a chance to win five is cool,” Koe told reporters after practice on Friday. “It will be something more when you’re done curling you’ll look back on and say ‘Wow. That was pretty good.’ But that’s definitely not the motivation this week. The motivation is just to win this year.”

Koe’s first championship came in his first appearance at nationals in 2010, beating curling legend Glenn Howard with a draw to the button in a dramatic extra-end final. He won again in 2014, and then for a third time in 2016 before his perfect run last year.

A win in Kingston would be five Tankards in eight career appearances. How’s that ratio Kevin?

Koe’s Calgary rink of third B.J. Neufeld, second Colton Flasch and lead Hebert are 31-21 on the season and haven’t won an event on the World Curling Tour, getting as far as the Canada Cup final where they lost in Ontario’s John Epping.

Still, Koe likes how his team is feeling heading into this year’s national championship.

“I think we’re looking great. I love the way we’re throwing it,” he said. “Season has been a little bit up and down, but there have been circumstances that have probably attributed to that. We’re maybe a bit of an underdog. Hopefully we can play okay and try to stay in the hunt.”

This will be the second time Koe represents Canada at the Brier after Curling Canada implemented the format to mirror the Scotties Tournament of Hearts. Koe lost to Brad Gushue’s St. John’s, Nfld., rink in the 2017 final in his first time wearing the red and white.

The Yellowknife native says he doesn’t feel any added pressure as the reigning champ.

“It’s not like this is our first time. Maybe when you’re at the worlds or something. It’s a little different feel, this Team Canada versus when you’re the only team from Canada,” said Koe. “We put a lot of pressure on ourselves to perform up to standard and this week will be no different, regardless of whether it’s Alberta or Team Canada.”

The 2020 Brier field is stacked once again with nearly half the 16-team field having a decent shot at standing atop the podium at week’s end, including Northern Ontario’s Brad Jacobs, winner of three Grand Slams this season, two-time champ Gushue, Ontario’s Epping and back-to-back finalist Brendan Bottcher of Alberta.

There are also dark horses like Saskatchewan’s Matt Dunstone, British Columbia’s Steve Laycock and the winner of the Wild Card game between Mike McEwen and Glenn Howard.

“There’s no team that you think should be here that’s not. It’s a great challenge if you happen to win this. I’m looking forward to it,” said Koe.

Canada kicks off their 2020 Brier against Ontario Saturday afternoon. You can watch all the action starting at 2 p.m. ET on TSN 1/5 and streaming on TSN.ca, the TSN App and TSN Direct.