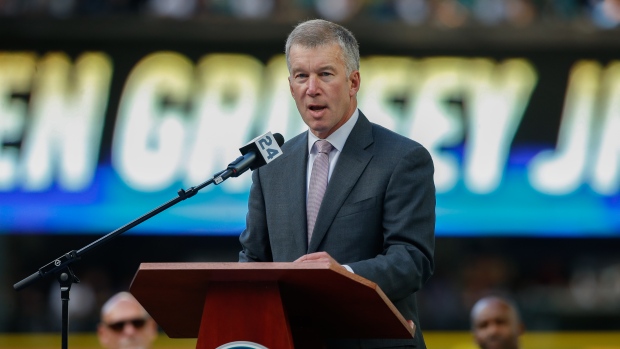 Kevin Mather has stepped down as president of the Seattle Mariners, the club announced on Monday.

The decision comes in wake of a controversial interview Mather did with a Seattle-area rotary club on Feb. 5 that became public on Sunday.

"Like all of you, I was extremely disappointed when I learned of Kevin Mather's recent comments," Mariners chairman John Stanton said in a statement. "His comments were inappropriate and do not represent our organization's feelings about our players, staff, and fans.
There is no excuse for what was said, and I won't try to make one. I offer my sincere apology on behalf of the club and my partners to our players and fans. We must be, and do, better.  We have a lot of work to do to make amends, and that work is already underway."

Stanton says he will serve as the team's acting president and CEO while a search for Mather's permanent replacement is ongoing.

"Everyone at the Seattle Mariners remains committed to our mission of winning on the field and serving our fans and communities off the field," Stanton said. "We will demonstrate that commitment through our actions."

During the 46-minute Zoom conversation with the Bellevue Breakfast Rotary Club, Mather disparaged top prospect Julio Rodriguez's command of English, despite the Dominican Republic native's continued efforts to better his usage. He also groused about having to pay for an interpreter for All-Star pitcher Hisashi Iwakuma.

"There is no excuse for my behaviour, and I take full responsibility for my terrible lapse in judgement," Mather said in a statement. "My comments were my own. They do not reflect the views and strategy of the Mariners baseball leadership who are responsible for decisions about the development and status of the players at all levels of the organization. I’ve been on the phone most of the day today apologizing to the many people I have insulted, hurt, or disappointed in speaking at a recent online event. I am committed to make amends for the things I said that were personally hurtful and I will do whatever it takes to repair the damage I have caused to the Seattle Mariners organization.”

The Madison, WI native had originally joined the Mariners in 1996.