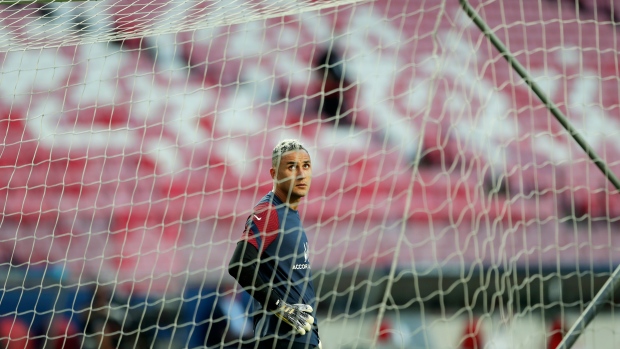 LISBON, Portugal — Goalkeeper Keylor Navas is back in the starting lineup for Paris Saint-Germain for the Champions League final against Bayern Munich on Sunday.

Navas had missed the semifinal against Leipzig because of a right leg muscle injury that had forced him to be replaced by Sergio Rico late in the quarterfinal against Atalanta.

Bayern coach Hansi Flick opted for Kingsley Coman instead of Ivan Perisic for the final at Benfica's Stadium of Light. Perisic had been the regular starter on the left but was replaced by Coman in the last two matches.

Seeking its first Champions League title, PSG will be at full strength in attack, with Neymar, Kylian Mbappé and Ángel Di Maria all playing. Di María scored a goal and set up two others in the team's 3-0 win over Leipzig in the semifinals. Mbappé came off the bench in the game against Atalanta because he had been nursing an injury.

Five-time champion Bayern, seeking its first European title since 2013, will count on its high-scoring attack again. It's led by Robert Lewandowski and Serge Gnabry, who have combined for 24 goals. Lewandowski has 15, two shy of Cristiano Ronaldo's record of 17 in a single Champions League season.

While Bayern has the best attack in the competition this season, PSG has the best defence, led by Brazilian veteran Thiago Silva and defensive midfielder Marquinhos, who will start again on Sunday.