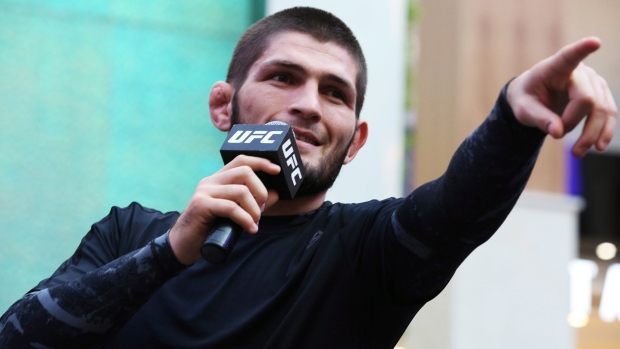 After 28 straight victories without a defeat, UFC lightweight champion Khabib Nurmagomedov has heard it all. He’s heard how every fighter has the style or the skill that he will not be able to handle and each time, he leaves with the victory.

Nurmagomedov says that he isn’t bothered by it one bit, instead looking forward to having his say once again in the UFC 254 main event.

"I like it, before every fight I hear people talking about how this guy is going to be the toughest challenge for him, blah, blah, blah,” Nurmagomedov told TSN’s Aaron Bronsteter. “I don’t pay attention to this. I’ve fought a lot of great fighters, a lot of great strikers and when they talk about his kicks, his punch, he’s going to stop the takedowns and give a hard fight in the stand up, I don’t pay attention. I just can’t wait for Saturday and everything that I feel and everything that I want, I’m going to say on Saturday night.”

Something that the 32-year-old champion has paid attention to are the past matches of his opponent. And after reviewing the tape, he believes that Gaethje has never had to deal with anything close to what he’ll bring to the Octagon.

"I’ve watched every fight, when he fought (Tony) Ferguson, Cowboy (Cerrone), Dustin Poirier, Edson Barboza, all of these guys, he doesn’t think about wrestling, he doesn’t think about wrestling defence. He only thinks about the striking game, kicking game, it was for him a kickboxing match,” said Nurmagomedov. “Right now he’s going to have to think about a lot of things, about pressure, about wrestling, about the ground game, he has to think about conditioning, everything. Now he has a completely different opponent. Of course I don’t fear something like this, I’m just very excited. I just want to show the world who is the best lightweight in the world, this is what I want right now.”

Canadian MMA legend Georges St-Pierre spoke to TSN a couple weeks ago about the possibility of coming out of retirement and testing himself against the undefeated lightweight champion and how they’ve tried to make a fight come together more than once.

The Dagestan born fighter is still very interested in meeting the UFC Hall of Fame inductee in the Ocatgon, after he takes care of some other business ahead of him.

"Of course I really want to fight him, Georges is a great opponent. When I think about fighting vs. Georges I get excited,” said Nurmagomedov. “He’s one of the guys when I grew up that I always watched. He’s the greatest fighter in UFC history and in all of MMA he’s in step with Fedor. It’s going to be an interesting fight, me vs. Georges. But I don’t know about his plan. My plan right now is Saturday night; I want to finish Justin Gaethje and on Tuesday when the UFC shows the ranking, I want to be the number one pound-for-pound fighter, this is my goal right now.”

Currently sitting in the No. 2 spot in the pound-for-pound ranking, behind former lightweight champion Jon Jones, Nurmagomedov believes when you add his recent body of work, a win on Saturday should move him right to the top.

Conor McGregor and Dustin Poirier appear headed to a fight in January and the winner of that bout could very well be the next challenger for the lightweight title. However, in the champion’s eyes, that will only be the case if that fight is contested at lightweight and not at welterweight or middleweight as has been rumoured.