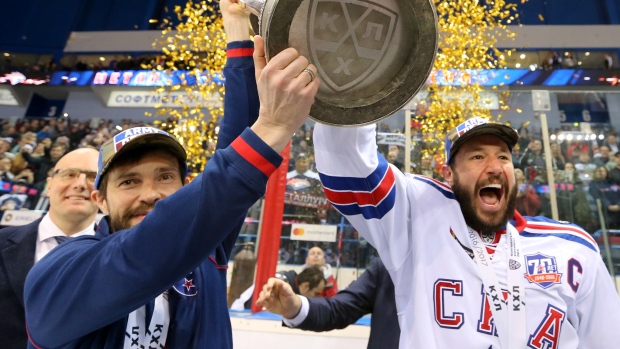 MOSCOW -- The Kontinental Hockey League has cut a Russian team as it tries to fix worsening financial problems, including debts to league players of over $17 million.

KHL president Dmitry Chernyshenko said Wednesday that the league is removing the Metallurg Novokuznetsk team, which had a 14-46 record and small crowds this season, as it bids to become leaner and more commercially successful.

Croatian team Medvescak Zagreb said in March it would withdraw to join the Austrian-based EBEL league.

Chernyshenko says the KHL -- widely considered the world's strongest league outside the NHL -- has been hit by "unprecedented" wage delays to players totaling over 1 billion rubles ($17.7 million).

Seven of the KHL's 29 teams are "regularly" late with salaries and some players have been waiting over six months for payment.

"The KHL will not stand for this," Chernyshenko said.

From 27 teams next season, the KHL will cut three more for the 2018-19 season, Chernyshenko said. A statistical rating system measuring teams' on-ice ability, their finances and crowd appeal will be used to determine who quits the league.

The league also plans to lower the salary cap and close some loopholes which help big spenders. That could make the league more competitive and reduce the dominance of wealthy teams like CSKA Moscow and SKA St. Petersburg, which are funded by state-owned oil and gas companies.

SKA won its second KHL championship in three years last month after posting a 46-14 record in the regular season and then winning all but two of the 18 games it played across four rounds in the playoffs.