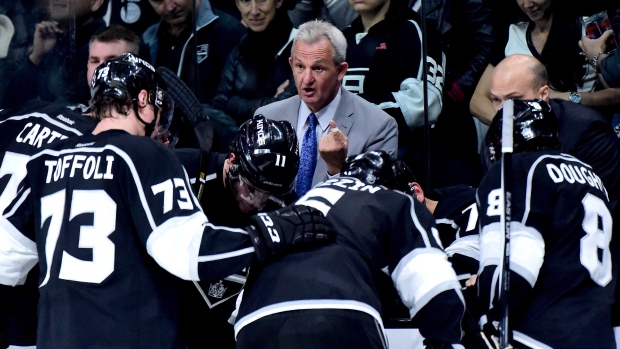 LOS ANGELES, Calif. - Coach Darryl Sutter has a contract offer to return to the Los Angeles Kings, and the club is waiting to find out whether he will accept it.

"Darryl has an offer on the table," Lombardi said. "I think there's an offer that's certainly respectable. I don't think this is about money. It's (more about) are we ready to do this? That issue of where we're going, and where we are, is always out there. It's a different challenge."

In his first public comments since the end of the Kings' season, Lombardi said he isn't concerned that Sutter might not return for a sixth season. Instead, Lombardi emphasized that he believes the 57-year-old Sutter just wants to make sure the Kings are going in the right direction after their second straight season ended too early for the former champions' taste.

Los Angeles won the title in 2012 and 2014, but missed the playoffs last season. The Kings rebounded strongly and led the Pacific Division for most of this season, but finished one point out of first place before getting routed in five games by San Jose in the first round of the playoffs.

"There's going to be a lot of work, and just like building it in the past, you have to stick with some tough times," Lombardi said. "Make no mistake, for us to get this back on track, there are going to be some minor punches in the gut as we fight our way through."

The Kings became an NHL power with a disciplined, defence-first approach built around the homegrown talents of defenceman Drew Doughty, centre Anze Kopitar and goalie Jonathan Quick. They also added Jeff Carter and Marian Gaborik on their way to their titles, but their success with veteran players has led to the burden of several lucrative, long-term contracts on Lombardi's payroll for years to come.

Lombardi spoke at length on the importance of reinventing the Kings' approach for the future. Los Angeles had one of the NHL's best defensive teams during the regular season, but struggled against the Sharks' aggressive attack in the post-season.

"Usually now, failure is the best teacher," Lombardi said. "So it's very simple for every part of this organization right now, and it started with the amateur scouts. We have to look at ourselves in the mirror and admit that ... we have to get back on that path — the innovation, the spark, the challenge that was there seven years ago and we were coming from the gutter."

Lombardi also reported progress on a new contract for forward Milan Lucic, who had a solid debut season with the Kings. Lucic could be a valuable commodity on the free-agent market this summer, but has repeatedly said he hopes to re-sign with Los Angeles, which acquired him from Boston.