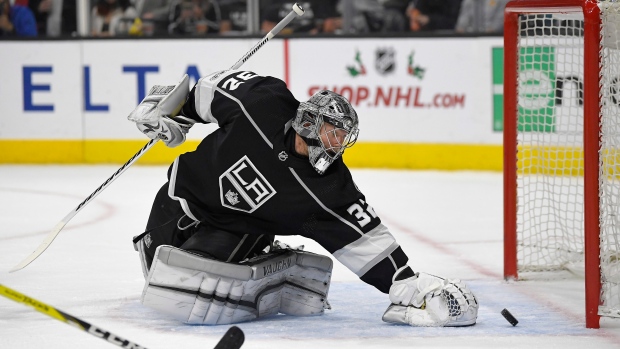 Los Angeles Kings goalie Jonathan Quick will not play against the New York Rangers on Sunday.

Quick is day to day because of a lower-body injury, general manager Rob Blake said in a statement.

The injury is not believed to be related to a lower-body injury Quick sustained in practice on Oct. 6, which caused him to miss five games.

Jack Campbell will start against the Rangers on Sunday. Campbell has a 2-4-0 record with a 2.57 goals-against average and .917 save percentage.

Peter Budaj, who was recalled from Ontario of the American Hockey League, will be Campbell's backup.

Quick has allowed 14 goals on 77 shots in three starts since returning from injury, going 0-3-0 in those games. Quick is 0-3-1 with a 4.55 goals-against average and .845 save percentage this season.

Brown sustained a broken finger in the Kings' preseason finale against the Anaheim Ducks on Sept. 29. Brown set career highs in points (61) and assists (33) last season.

Forward Michael Amadio was assigned to Ontario in a corresponding move.