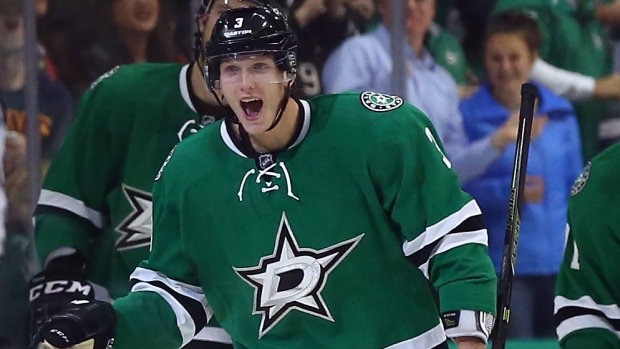 As the Dallas Stars keep humming along, so too does the hype train for defenceman John Klingberg.

The hype is well deserved. Klingberg is having a monster season for a team that seemingly scores (and wins) at will right now. As long as he keeps logging minutes on one of the NHL’s best teams, he’s going to get a lot of buzz in individual award circles. For a 23-year-old in just his second NHL season, merely being in the discussion is praise of the highest order.

Qualitatively speaking, he checks off all of my preferred boxes. He’s a silky smooth skater that shows tremendous poise with the puck. He’s frequently the first leg in Dallas breakout scheme – a rapid-fire of sequential passing in the defensive zone that gets the team out into transition quickly and cleanly, mitigating breakdown frequency and increasing opportunities for waves of skillful attackers. Perhaps most importantly, Klingberg’s head coach recognizes his immense value. Lindy Ruff is playing him more than 23 minutes a night, about two minutes more than what he saw in his debut 2014-15 season.

I don’t think saying ‘Hey, Klingberg is quite a good defenceman’ is an argument in dispute. But, at the quarter point of the regular season, I think consensus has blown past that. We have transitioned from verifying him as talented to throwing his name in the Norris Trophy discussion.

That’s a pretty big jump. And generally when we make these massive shifts, I like to exercise a bit of caution. Again, Klingberg seems like the real deal. But, can we compare him to the rest of the league in a way that would legitimize his candidacy?

One of the things I like to do with the Norris Trophy is take a series (in this case nine) of meaningful 5-on-5 statistics for all regular defencemen and apply a ranking system on placement in that area. For example, I might be curious where Klingberg ranks across defencemen in terms of 5-on-5 scoring. That’s an easy pull – he’s currently second best in the league, just one back of Ottawa’s Erik Karlsson.

I replicate the same idea for other metrics that speak to a candidate’s contributions. What does their penalty differential look like? How much ice-time are they burning up per game? Does their team experience a massive uptick in performance (incl. scoring chances, possession, goals) when the player is on the ice versus off? Is the player facing difficult competition?

The thought behind this is simple: it allows us to look evenly at what voters historically consider when selecting the NHL’s top defenceman. If each statistic is treated as equal, the defencemen with the best average ranking across these nine statistics should be the same defencemen in consideration for the award. It's fairly rudimentary and might require some post-hoc adjustments, but I'm willing to bet that it'll do well in pinning down the blueliners who are pulling the most weight across the league.

Our ranking scale, simple as it may be, seems to pass a quick sanity check. The list is littered with top-pairing defencemen – guys who drive team success at 5-on-5 in just about every hockey market.

By this methodology, Klingberg grades out incredibly well. His high ranking score is driven by exceptional performance in a few areas. As mentioned previously, he’s the league’s second-best scoring defender at 5-on-5. But he’s also logging a ton of minutes per game (ninth), fires shots to the net like a maniac (19th), and seems to have an impact on his team’s performance in the Goal% department (12th).

So, at least by his performance relative to other defenders (here specifically, only extremely talented defenders), Klingberg should be in the Norris Trophy conversation.

Now, the last question: can he realistically catch his Swedish counterpart in Ottawa? Karlsson’s average ranking is ridiculous – he, once again, seems to be without comparison.

To investigate, let’s look head-to-head at Klingberg v. Karlsson and see how they rank against league defenders.

Klingberg is not blown out of the water here. That’s a compliment enough when you consider that he’s being compared against a two-time Norris Trophy winner in the prime of his career.

But, what I think this suggests is that the biggest difference between the two is really the difference between the Dallas Stars and Ottawa Senators. In Dallas, we seem to have a good team made great by the development of Klingberg into a true first-pairing talent. In Ottawa, we seem to have a bad team that looks good because they have Karlsson. Klingberg is helping in drive this Stars team to success, while Karlsson is basically doing it on his own.

Klingberg’s a former fifth-round pick with all of one season and change under his belt. Merely being in the Norris Trophy discussion after the first quarter of the regular season is a stunning accomplishment. As for winning the award? It is going to be mighty difficult for him to unseat fellow Swede Karlsson.