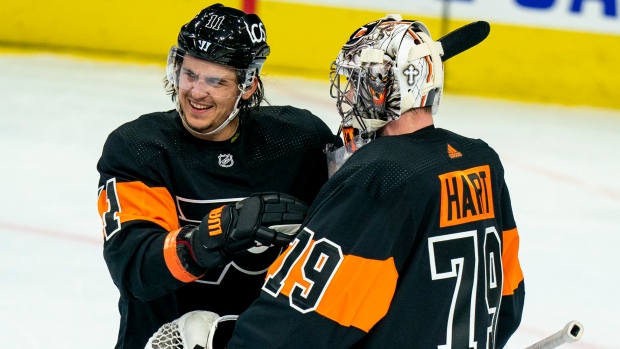 PHILADELPHIA — Gritty’s hat trick was that the mascot had one at all, a comically oversized Flyers cap he flung, frisbee-style, onto the ice. Gritty went big — and so did Travis Konecny in his first career hat trick.

Konecny scored three goals and had an assist and the Philadelphia Flyers survived losing team MVP Sean Couturier to an injury in a 5-2 win over the Pittsburgh Penguins on Friday night.

Ivan Provorov scored and Oskar Lindblom added an empty-netter for the Flyers.

The Flyers swept their rival in the two-game home set, but can only hope they won’t lose Couturier for extended time. Known as “Coots,” he needs an MRI on Saturday on one of his shoulders. He absorbed a stiff check on his left shoulder and that could be the one that was injured.

Couturier, who last season became the first Flyers player in 33 years to win the Selke Trophy as the NHL’s top defensive forward, left the game after just two shifts and 45 seconds.

“When your No. 1 centre goes down, it’s always tough to overcome it,” Flyers forward Jake Voracek said.

The Flyers, who won 6-3 on Wednesday, appeared to have an easy time, even with Couturier out. Konecny scored a power-play goal 7:27 into the game and added a second two minutes later when he crashed the net and pounded in a rebound.

“I have to keep going to the net," Konecny said. "Everybody says get to the blue paint because bounces do happen when you are in there.”

Provorov made it 3-0 on a slap shot from the circle, and that was enough to chase goalie Tristan Jarry. Jarry allowed three goals on only six shots and was benched in favour of Casey DeSmith.

“I don’t think games can be pinned on any one person,” Penguins coach Mike Sullivan said. “We win as a team and we lose as a team. To his defence, some of the chances were high quality. I thought we were the better team tonight. But we couldn’t convert on ours and they were opportunistic.”

DeSmith held the Flyers in check while the Penguins rallied against Carter Hart. Sidney Crosby and Brandon Tanev, who scored in the opener, had goals in the first, cutting it to 3-2.

“We just couldn’t find that tying goal,” Sullivan said. “But I thought there was plenty of emotion and plenty of push-back from our guys tonight.”

The Flyers took only four shots in the second period and played sloppy and out of sync following the fast first 10 minutes.

“That’s one of the reasons why the game was so sloppy, because we’re missing Coots,” Voracek said.

The 23-year-old Konecny needed those goals as a confidence boost in the wake of a dreadful post-season in which he failed to score in 16 games. He led the Flyers with 24 goals in the regular season and was stumped when his scoring dried up in two post-season rounds.

He found the touch against Pittsburgh and scored his first career hat trick -- with no fans in the arena, Gritty tossed an oversized cap on the ice -- with 7:07 left in the game.

“By going to the net hard, by stopping and being at the right spot he found a way to capitalize on some of his opportunities,” Flyers coach Alain Vigneault said. “He’s a big player, an important player on our team and we need him to play well.”

“We’re certainly excited and encouraged that we’re going to get him with the team here fairly shortly,” Penguins coach Mike Sullivan said. “We’re going to try to assimilate him into the group as quickly and as effectively as we can.”

Penguins defenceman Zach Trotman underwent surgery on his right knee Thursday to repair a torn meniscus and is expected to miss four to six weeks.

Hart had 31 saves and stopped 10 in the second period to steady the Flyers.

“There’s no doubt that Carter Hart is the difference but I’m not going to apologize for good goaltending,” Vigneault said.

Penguins: Head home for a two-game set against Washington. Home opener Sunday and the second game on Tuesday.