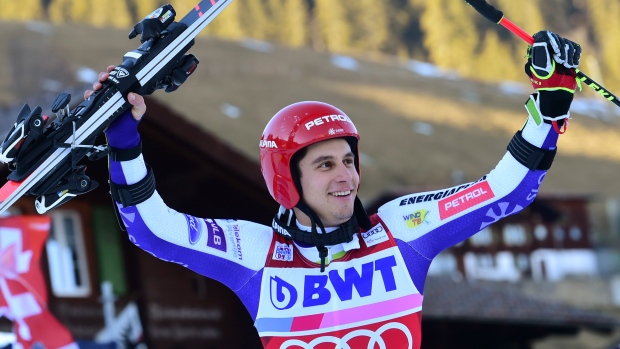 Kranjec had been sixth fastest in the morning run and his aggressive style took him 0.29 seconds ahead of Filip Zubcic, who got a career-best result.

Kranjec made one turn through an early gate with his left ski raised high in the air, and swayed sharply off an ideal racing line making it through the final gates.

“Everything is possible in the second run and I pushed as much as possible," the Slovenian racer said.

Tied for third place, Henrik Kristoffersen and Victor Muffat-Jeandet were 0.64 behind Kranjec.

Kristoffersen retook the lead in the overall World Cup standings, though conceded the giant slalom points lead to Kranjec.

First-run leader Luca De Aliprandini was ahead at the time checks when he skied out halfway down, sliding away on his right hip.

Fast-changing light on the storied Chuenisbaergli course again seemed to be a factor. The bright sunshine dives behind the surrounding mountains at around 2 p.m. local time, making the course darker and trickier for the first-run leaders to pick the best racing line.

The four men on the podium Saturday were all outside the top five going into the second leg, where the top 30 start in reverse order. None of the top five in the morning ended within one second of the winner.

Even without Hirscher leading its rival and neighbour Austria, Switzerland could not place a racer on the podium at its classic giant slalom, which featured in the original week of World Cup racing in January 1967.

No Swiss man has finished in the top three since 2008, and Loic Meillard could not end the streak Saturday despite being third fastest and only 0.11 back in the first run.

Meillard fell out of contention in the fading light to end 1.97 back in 17th.

The best-placed American was Ted Ligety, who won at Adelboden in 2013 during his years dominating the discipline. Ligety moved up from 14th to seventh, ending 0.95 behind Kranjec.

A slalom completes the Adelboden meeting on Sunday.