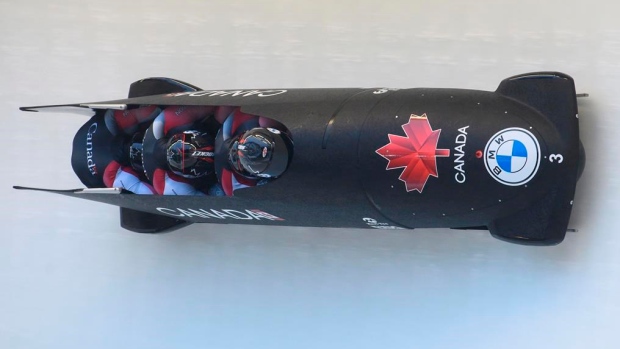 ALTENBERG, Germany — Justin Kripps bounced back from a crash in training to pilot Canada to silver in a World Cup four-man bobsled race Sunday.

The 34-year-old from Summerland, B.C., teamed up with Cam Stones of Whitby, Ont., Ryan Sommer of White Rock, B.C., and Ben Coackwell of Saskatoon to finish with a two-run time of one minute 49.16 seconds.

"I have never medalled here in the four-man so this was really big for us,” said Kripps, who won bronze with Stones in the two-man a day earlier.

"We crashed in training this week, and it was pretty hard for me to go do another run to qualify because I was pretty beat up so this one is extra special," Kripps added.

It was the third four-man medal this season for the Canadians, who are ranked second overall in the World Cup four-man standings.

The silver medal was additionally special for Coakwell, who tied Lascelles Brown for the record of most World Cup medals in the four-man competition by a Canadian brakeman with 17.

"Lascelles was a major mentor for me. He probably doesn't know this, but he is an idol of mine and amazed me every day with his talent," said Coakwell. "He taught me how to push with his heart and I'm immensely thankful to accomplish something like this."

The Canadian women, meanwhile, struggled to find the fast line down the 17-turn Altenberg track.

Melissa Lotholz of Barrhead, Alta., and Sara Villani of Norval, Ont., were the top Canadian sled in seventh place.

This report by The Canadian Press was first published Dec. 19. 2021.