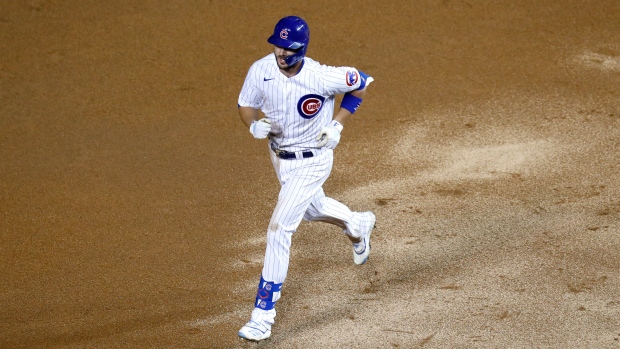 Javier Báez had a sacrifice fly and a nice play in the field as NL Central-leading Chicago improved to 8-2 for the first time since 2016. Bryant also doubled in the first after missing two games with a stomach ailment.

Mills (2-0) allowed three hits, struck out four and walked three on a wet, windy night at Wrigley Field. Mills got a chance to start when José Quintana had surgery on his left thumb last month, but the right-hander is making a strong bid to keep his spot in the rotation.

“What happened to Q is not fun, but that's why I'm here,” Mills said. “I'm here to step in and fill in when I need to be and you know, do whatever I need to do.”

Mills was selected by Kansas City in the 22nd round of the 2012 amateur draft and made his major league debut with the Royals in 2016. But he hadn't gotten a chance to face them since he was traded to the Cubs in February 2017.

“It was a team that got rid of me a couple years ago,” Mills said. “Understand the business, and my job is to make it hurt whenever I face them again.”

“It’s frustrating for the whole group because we know the kind of potential of our whole offence,” Kansas City manager Mike Matheny said. "When we get that kind of pitching, we make defensive plays, it just comes back to we have an offence with the potential to put up big numbers, it’s just that the consecutive hits, we’re just having trouble getting multiple in an inning.”

Bryant connected for his first homer of the season in the seventh, hitting a drive to centre off Ian Kennedy. The 2016 NL MVP struggled in his first six games of the year, going 3 for 25 at the plate.

Bryant said he told his infant son, Kyler, he would hit a home run for him.

“It's kind of cool. I'll be able to tell him that when he's a little older," Bryant said. “He (doesn't) remember anything now.”

Casey Sadler got the first two outs of the eighth for Chicago before Rowan Wick finished for his second save.

Cubs manager David Ross is trying to stay away from Craig Kimbrel while the closer works on his mechanics after a rough start to the season.

Mills allowed two runners in each of the first two innings and one more in the third and fourth, but danced out of trouble each time. He got Franchy Cordero to bounce to first with runners on the corners for the final out of the first.

Mills got some help when Báez made a slick tag at second to catch Adalberto Mondesi attempting to steal in the fourth, ending the inning. Third baseman David Bote also made a great, barehand play to rob Mondesi of a hit in the seventh.

“The wind was howling out there tonight. We played really good defence,” Ross said. “I'm proud of our defence.”

Duffy (0-2) matched Mills zero for zero until the fifth. The Cubs loaded the bases on two walks and a single. After Anthony Rizzo popped out, Báez drove in Nico Hoerner with a liner to right for a sacrifice fly.

Duffy then coaxed Willson Contreras into an inning-ending groundout, but the damage was done. The left-hander allowed three hits, struck out six and walked four in his third start of the season.

“It was exactly what we needed from him in that situation. He was fantastic,” Matheny said.

Cubs: Quintana threw 30 pitches during a bullpen. He is scheduled for a two-inning simulated game Thursday at the team's alternate site in South Bend, Indiana.

Right-handers Brady Singer and Kyle Hendricks get the ball when the series resumes Tuesday night. Singer (0-0, 3.60 ERA) is making his third major league start for Kansas City on his 24th birthday. Hendricks (1-1, 4.05 ERA) is looking to bounce back after he allowed six runs and seven hits over 4 1/3 innings in Chicago's 12-7 loss at Cincinnati on Wednesday night.