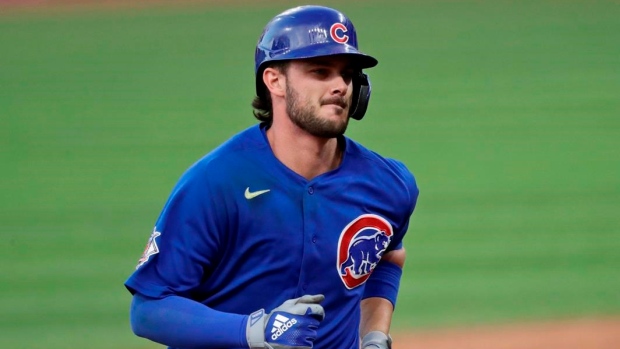 He's not sure who sent the message, just that it was jarring. It didn't take long to find out it was false, too.

Bryant appreciated the open line of communication he and agent Scott Boras had with Cubs president of baseball operations Jed Hoyer and the quick response from the team. But how much longer Bryant will remain in Chicago is unclear.

Bryant said he is open to signing a long-term contract to remain with the Cubs before his deal expires at the end of the World Series.

“I've always said I've been open and willing to hear whatever Jed now has to say and would take it with open arms and consider everything that is thrown my way,” he said. “I think I've communicated that well with them. They know where I stand.”

But there is plenty of uncertainty surrounding the Cubs, particularly when it comes to some of their biggest stars.

Bryant, Anthony Rizzo and Javier Báez have expiring contracts. All three struggled during the pandemic-shortened season. But they all have played huge roles in transforming the long-suffering franchise into a championship organization.

They helped lead the Cubs to a World Series title in 2016, ending a drought that dated to 1908. But the organization is in transition.

Chicago won the NL Central last season and made the playoffs for the fifth time in six years only to manage just one run while getting swept in two games by Miami. The Cubs haven't advanced in the post-season since 2017.

Hoyer was promoted from general manager when Theo Epstein stepped down as president of baseball operations, and ace Yu Darvish got traded to San Diego. Bryant said he was surprised by that deal and sad to lose a pitcher who was “really coming into his own here and feeling comfortable and starting to goof around and talk with all of us.”

Darvish isn't only big name gone from the Cubs. Jon Lester and Kyle Schwarber signed with the Washington Nationals. Bryant, Rizzo and Báez all are facing uncertain futures, and it's unlikely the team will keep all three.

“I just kind of go back on what I've said in the past," Bryant said. "I don't have anything else to add. There are a lot of really good friends here — not just teammates, but really good friends and good people. I just enjoy taking the field and being here alongside these guys every day. Never taken that for granted, and I won't start now.”

Bryant has a $19.5 million salary, with Rizzo due $16.5 million and Báez $11.65 million. Bryant's name in particular has come up in trade talks, though he insisted he is “not surprised at all” he remains with the team.

“I've had good conversations with Jed, good communication,” he said. “He's letting me know what's going on. I can ask him what's true, what's not true. The main thing I got from him is most of it is not true. I wasn't surprised."

Bryant was National League Rookie of the Year in 2015 and MVP in 2016. He made his third All-Star team in 2019, only to struggle through injuries last year in his worst season as a pro.

Bryant batted a career-low .206 with four homers and 11 RBIs in 34 games. Two of those home runs came in the final two games of the regular season against the crosstown White Sox. He then went 0 for 8 in the Marlins series, though he felt he made solid contact.

“It had a big impact on me, ending the season on a high note and just taking some really good swings,” he said. “In the playoffs, too. I think against the Marlins I hit some balls on the barrel, lineouts. That felt good. I kind of felt like, yeah, I was kind of finding what I had been searching for last year.”