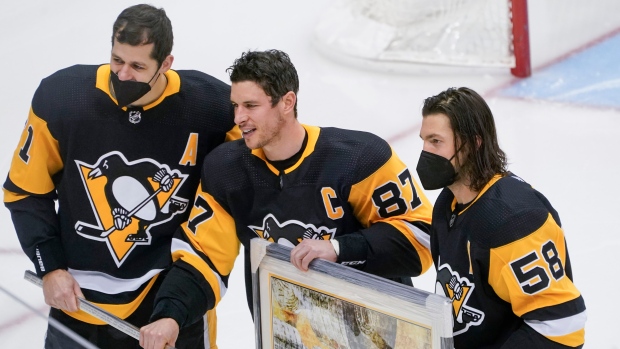 While there's been speculation on the future after another early playoff exit, Kris Letang said Friday that he, Sidney Crosby and Evgeni Malkin want to retire as members of the Pittsburgh Penguins.

All three players have spent their entire careers with the Penguins, winning three Stanley Cups. The Penguins have face questions about their core after failing to win a playoff series in each of the past three seasons.

"Me, Geno, and Sid want to finish as Penguins," Letang said. "We truly believe in ourselves. We think we have a lot to offer... That's what we want, but it's not up to us."

Letang on playing with Crosby and Malkin: "Me, Geno, and Sid want to finish as Penguins. We truly believe in ourselves. We think we have a lot to offer... That's what we want, but it's not up to us."

The team has won just one playoff series since winning back-to-back Stanley Cups in 2016 and 2017.

Crosby, 33, is coming off his 16th NHL season, while Letang and Malkin - both 34 - have 15 years of play under their belts. Crosby said after the team's Game 6 loss that speculation around whether the team should move a member of the trio is nothing new.

"They've been saying that for four years, right? So I don't know if I'm going to change their minds," Crosby said Wednesday night. "As far as what I'd say, I really don't know. I know that the three of us, we want to win and we'll do whatever it takes to try to compete to do that every year."

"I believe in the core," Penguins head coach Mike Sullivan said after the Game 6 loss. "This is the best core group of players that I've ever been around, bar none. They're a passionate group. They're generational talents. They still can compete at an extremely high level. They've shown it game in and game out."

The Penguins' nine highest-paid forwards are all under contract for next season along with four highest-paid defencemen. According to CapFriendly, the team is currently $1.16 million over the $81.5 million salary cap.