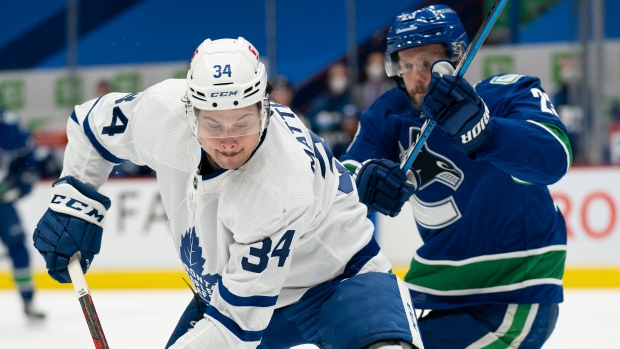 TORONTO — If it wasn’t obvious from Auston Matthews’ lack of offensive production over three games since returning to the Leafs’ lineup from a hand injury, the centre openly admits he isn’t close to fully recovered from the ailment.

“It’s alright, [but] I’d definitely like to see it heal a bit [more],” Matthews told reporters on a Zoom call Monday following the team’s practice. “I think I still need it to progress a bit. I'm still trying to find my rhythm for sure coming back. I think, physically, my legs and lungs and everything felt fine. I think it's just kind of getting my timing back.”

Matthews has been dealing with the upper-body injury throughout this regular season, missing a game first on Jan. 22 before he re-aggravated the problem last month and had to sit out two more games on Feb. 28 and March 1.

It was unfortunate timing for Matthews, who had been on one of the hottest goal-scoring streaks in the NHL. The 23-year-old centre tallied 16 goals in the 15 games after returning from that one-game absence, and had registered at least one point in all but two games all season. His 18 goals on the season still paces the entire NHL.

But Matthews has been held off the scoresheet entirely since stepping back in on March 3, making this three-game point drought his longest of the season.

Head coach Sheldon Keefe said he is willing to make adjustments for Matthews on the ice until the hand is more stable.

“It's clear that [the injury] affects his shot,” Keefe admitted. “We’ve moved him around on the power play as a result of that, since he's not as comfortable shooting. But he's shown that he's very good in a lot of other areas. It doesn't seem to affect his ability to handle the puck, to pass the puck. But he's [also] dealing with the mental effect of what not being 100 per cent himself has on his game, and the effect of missing time. When you miss time, you lose your rhythm, and it throws you off a little bit.”

They may not be going in right now, but Matthews still led all Leafs with 15 shots on net over the team’s past three outings. That’s a good indicator to Keefe that Matthews will find a way to contribute over Toronto’s upcoming three games against Winnipeg, even if he isn’t feeling entirely normal.

“He's found ways to generate chances and shots. He's made plays for his linemates, and he's bringing a lot of really positive things to us,” Keefe said. “In time, it's the type of injury that will heal itself. He's just got to work his way through it and we're fortunate to this point we don't think it's going to get worse. It’s just something he's going to have to play through and he's done a good job of that.”

Still, Toronto will need its top line to start firing again against a Jets team sitting second in the North Division.

After losing two straight games to Vancouver, the Leafs are limping into what could be a decisive stretch of their compact schedule. Toronto is still the top team in the North with a seven-point lead over Winnipeg, but they’ve also played two more games. The next three contests could either allow the Jets to close the gap considerably or give the Leafs a massive advantage over the rest of the division.

To achieve the latter, Matthews’ unit with Mitch Marner and Joe Thornton has to find its spark. All three players have produced zero even-strength points since Matthews came back, and are a combined minus-11 in Toronto’s past three games.

“[Things] were not as good as we'd like it to be,” Matthews said. “Definitely we can improve in a lot of different areas. I think we were just forcing it a couple of times and there were too many one-and-dones and we weren't really sustaining much offensive zone time in [our opponent’s] end. I think that's something we'd like to do more is get rolling out there.”

“I think just funnelling more pucks to the net, getting more traffic in there,” added Thornton on how to get the line back on track. “Today was a great practice for us. We’ve just got to get around the net, bang some loose ones in. But we've been doing a good job, we've just got to continue it.”

The Leafs have been lacking one major net-front presence ever since Wayne Simmonds broke his wrist against Vancouver on Feb. 7. But the winger is on the road to recovery himself, and resumed skating last week while Toronto was on its West Coast road trip.

The initial timeline for Simmonds to get back in the lineup was six weeks, and Keefe said he’s progressing well on that front after another day of on-ice work Monday.

“His cast has come off here so he's able to do a lot more,” Keefe said. “My understanding is the bone is healed and it's just a matter of him now rehabbing and getting his full function back and [getting] comfortable handling and shooting pucks and stuff like that. I think it's just a matter now of whenever he gets the strength back to be comfortable doing the things he needs to do.”

Goaltender Jack Campbell also participated in practice on Monday as he continues rehabbing a re-aggravated leg injury. Campbell was originally hurt on Jan. 24 against Calgary but returned for Toronto’s win over Edmonton on Feb. 28.

Campbell hurt himself again at some point in that victory and has been sidelined since. Keefe said he doesn’t know when Campbell will be available, but that his presence for the duration of Monday’s session was “a real positive sign” he’s on the mend.

Top of mind for Keefe though is seeing the Leafs bounce back from their first set of regulation losses this season. Toronto was uncharacteristically outscored by Vancouver 7-3 in those defeats, and Keefe knows the high-flying Jets won’t make it any easier to bury pucks.

“We've seen [lately] with teams we've played that they've been hard on us generating offence,” he said. “I just think the more that teams are settling into the season and their systems and getting to know all the opponents that much better, it’s going to continue to get harder. So we’ve got to continue with it ourselves [by getting better].”