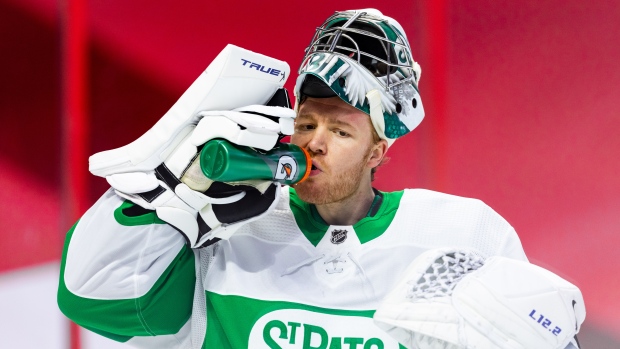 Frederik Andersen is not at his best right now. No one knows that better than him.

The trouble is a nagging lower-body injury, which sidelined the Maple Leafs goalie for two weeks earlier this season and has continued to take a toll in his first six games back.

Andersen has recorded just two wins since March 3, and went four straight games with a sub-.890 save percentage. Those results aren’t good enough, and Andersen will have to rebound while also attending to his health.

“I'm not really where I want to be obviously,” Andersen told reporters on a post-practice Zoom call Thursday. “I think I'm working towards just getting to as good as possible. But I think everyone goes through a season where you'll have something going on. It's just a matter of how well you can manage it and play through it, and you try to do the best you can to play as well as you can.”

Andersen was on a hot streak when the injury occurred against Montreal on Feb. 15, interrupting an impressive 10-game span that included a league-leading 7-1-2 record, .906 save percentage and 2.71 goals-against average.

Andersen returned to the lineup on March 3, capping off the Leafs’ three-game sweep of Edmonton by allowing just one goal in a 26-save victory. It has been all downhill from there –Andersen lost three of his next four starts, and recorded another defeat when stepping in to replace Michael Hutchinson in the first period last Sunday in Ottawa.

All told, Andersen is 2-4-0 with an .887 save percentage and 3.30 goals-against average in March. It’s by far his worst run of the season, but Andersen still feels he’s best serving the Leafs by being available to play through injury.

“I think as a competitor and as a human you want to be out there and competing and helping your team win,” he said. “So it is tough. It's a very fine line when you do take that step back and look at improving your physical health. There's no perfect answer [on when to come back], I think it's just taking it day by day and [deciding] when you really feel like you can contribute to the team.”

Andersen is also not alone in being at less than 100 per cent. Auston Matthews has been playing with an injured wrist for weeks. Joe Thornton has battled a couple of lower-body issues. Backup goalie Jack Campbell is just now eyeing a return from a re-aggravated leg injury.

“Everybody in their own way is dealing with something,” head coach Sheldon Keefe said. “Fred missed time and we were patient and waited and gave him opportunities to get to the point where he felt confident going in net. If anything, the game in Ottawa [helped him]. He had no expectations of playing…and handled that game very well for us, so that was a very encouraging sign.”

Injured or not, Andersen has gone through similar slumps in recent years.

The pattern weaves all the way through Andersen’s career in Toronto. So much so that general manager Kyle Dubas commented on the sags – and Andersen’s resiliency – during his mid-season media availability on Tuesday.

“[Andersen] has a tremendous ability to gather himself when he may not be playing to the standard that he sets for himself and I think he's been very open about that,” Dubas said. “I think if you go back through each of his seasons, anytime where Fred has found himself in a bit of a rut, he's able to pull himself out of it and that's the expectation of what we'll see from him as we move ahead.”

Toronto is currently in one of its longest breaks of the season, having not played since Sunday and with only one set of games Friday and Saturday before another four-day break next week. The Leafs were 1-5-0 in their last six before the time off, and while poor goaltending was only part of the problem, Andersen will try to turn the tide on that in Friday’s projected start.

“I know I have the ability to be a great goalie in this league and help the team win a ton of hockey games,” he said. “I think it's just a matter of finding that confidence again and I know that it's right there. I think there's just a few things that I need to keep working on and find again. The tough part is being patient and to just keep working at the daily things that give me success.”