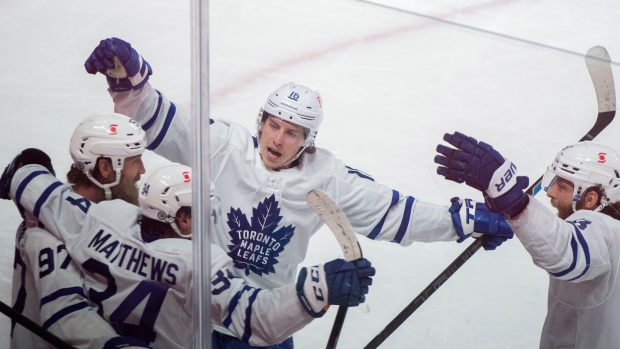 There’s been a lot of that this season, with Matthews leading the chase for the Rocket Richard Trophy with 40 goals in 49 games. Marner has been on Matthews’ line throughout the year, assisting on 24 of those 40 markers.

But Marner is more than a mere footnote to Matthews' success,​ producing 66 points – good for third in the NHL – of his own. It's a relationship that started building even before the pair teamed up on the ice, back when Marner was as excited as any Leafs fan just to see Matthews in the fold.

“It was actually draft night for him [on June 24, 2016], and I was at a concert at Budweiser Stage [in Toronto], and when we picked him [first overall], everyone started an 'Auston Matthews' chant,” Marner recalled on a post-practice Zoom call Friday.

“And the kid I was and am still, I was in the middle of it, chanting as well. I’ve told Tony that story a couple times and we laugh about it now.”

Marner and Matthews became fast friends from there, extending their shared passion for sports into the digital realm.

“When we got to development camp [the week after Matthews was drafted], that was really the first time I got to sit down and actually talk with him, and it was just a lot of fun,” Marner said. "I brought my PlayStation so we were playing NBA and really anything on PlayStation. We’d always go back to our room and hang out and our bond grew from there.”

Through 53 games in this pandemic-shortened season, Marner sits third in both points and even-strength points (50). His 19 goals have all come at 5-on-5, tying him for fifth in even-strength markers.

Matthews has three regular-season games left to capture the goal-scoring mantle and continue establishing himself as one of the league’s elite snipers. Marner is building a similar reputation, but as a playmaker. Marner was more of a scorer than passer early in his junior hockey career, but over time his mindset shifted to making plays.

That’s served Marner well in his NHL career so far. Since entering the league in 2016-17, Marner is eighth overall in assists (255) and 11th in points (357 through 353 games). The 24-year-old credits his personal skills coach, Rob Desveaux, with helping him make the transition.

“I've been working with [Desveaux] since I was four,” Marner said. “And from his standpoint, he's always just made me feel like you’ve got to use your mind out there. And when I see a play that I think I can make, don't be afraid to make it.

“We just really work on seeing the whole ice, making sure that I'm using my creative mind. Another big part is always passing on my backhand, my forehand, saucers or anything like that – just always trying to work on all aspects of my passing game and making sure that I could do it.”

Marner’s attention to detail doesn’t go unnoticed. He regularly takes advantage of the team’s skill sessions before practices, and goes full speed into every drill.

“He's like a magician with the puck,” said Alex Galchenyuk. “He’s got an outstanding skill set, he's definitely a talent. And the chemistry he has with Matty is tremendous. He puts in a lot of effort in practice to work on those skills and it definitely shows up in games.”

“[It’s impressive] the way he works on his game in a 200-foot style,” said Morgan Rielly. “You blink and he's controlling the puck again. What he's able to do at both ends of the ice is extremely valuable to our team and his game. When he brings that aspect, it really brings his teammates up to the same level.”

Coach Sheldon Keefe hasn’t been shy about moving players around the lineup this season, but he’s kept Marner steadily on Matthews’ hip.

Keefe has considered boosting his other lines with Marner’s presence at times, and had him rolling around with other linemates when Matthews was out injured for five games. But the thought never gets entertained for very long.

“I've been a little bit tempted to try it and mix it up, but I think there's just been chemistry between the two,” Keefe said. “And it brings some real consistency in terms of the threat of offence to our team and I think it really causes a lot of problems for the opposition to have to think about. I just really felt comfortable with the chemistry and felt that, even if I would go away from it for a little bit, it would never be anything permanent. The results have been very positive.”

Instead, Keefe will keep tinkering with the Leafs lineup in other ways. For Saturday’s game against Montreal, Adam Brooks will step back onto the fourth line for Stefan Noesen and Rasmus Sandin will come out for Ben Hutton. Keefe said removing Sandin has to do with giving the Leafs more salary cap flexibility as they head into their final two regular-season tilts next week.

While the Leafs prepare for the Canadiens on Saturday, Frederik Andersen will make his second appearance with the American Hockey League’s Toronto Marlies. Andersen has been out since March 20 with a knee injury and is currently on a conditioning loan in the AHL. He played just over 30 minutes for the Marlies in Thursday’s 5-3 loss to Manitoba, giving up two goals on five shots before finishing with 12 saves on 14 shots total. Keefe said the plan is for Andersen to play all of Saturday’s game.

“This stint with the Marlies is just about getting [Andersen] back into game action,” Keefe said. “And getting back to building up his workload to be ready to play NHL games. He played yesterday, he got to practice with them today, he’ll play again tomorrow and then we’ll reassess it from there.”