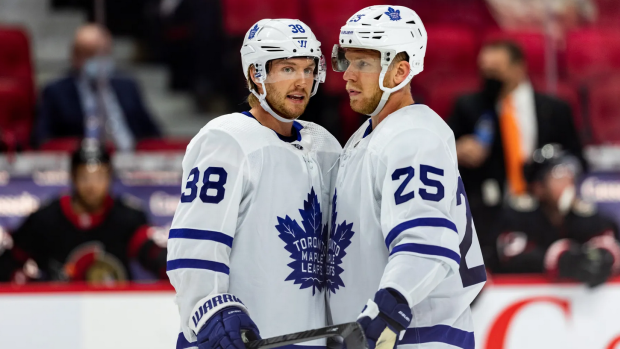 TORONTO — Ondrej Kase is new to the Maple Leafs this season, but Jack Campbell has long been familiar with his work.

The goaltender used to face Kase multiple times a year, when Kase was a sniper for Anaheim and Campbell was the backup in Los Angeles. Suffice it to say, Campbell is pleased they’re now on the same side.

“He’s had a couple of nice breakaway goals on me, so [when he came here] I told him, ‘good job,’” Campbell said after the Leafs’ morning skate on Monday, ahead of facing Ottawa in a preseason tilt.

“And I said I hope to see him [now] in the blue and white scoring a bunch. He's a really nice guy, works his tail off and he's a super skilled player, so he looks great out there and it's exciting to have him as part of the group.”

Kase hasn’t had a problem impressing with his play during his career. It’s staying healthy that’s been a problem.

The 25-year-old winger went from scoring 20 goals in 66 games with the 2017-18 Ducks to being frequently sidelined by concussion issues. Kase missed time with at least four documented concussions between 2018-20 yet found ways to pick up where he left off when returning to the lineup.

Head injuries held Kase to only 30 games in Anaheim's 2018-19 season, but he still tallied 11 goals that year. Kase appeared in 49 games – and scored seven goals – for Anaheim the following season, before being traded to Boston right before the COVID-19 pandemic shutdown the season.

Kase suffered another concussion in the second game of the Bruins’ 2020-21 campaign, which ultimately limited him to just three appearances all year.

Kase became an unrestricted free agent in July. Despite the health concerns, Toronto brought Kase in on a one-year, $1.25 million contract. Now Kase is trying to make good on the opportunity.

“I was actually excited that the Leafs signed me, because you need to trust yourself if you're going to play in the best league,” Kase said. “So, I try to trust myself the best I can and hopefully it will be great. Sometimes it was tough [not playing], but my family and my girlfriend supported me a lot, so it was a little bit easier.”

Back home in the Czech Republic last summer, Kase went to work preparing his body for the 82-game season ahead. He started by upping his physical therapy routine from one session a week to four, and he skated consistently with his hometown team, SK Trhači Kadaň.

Kase is pleased with the early returns on his effort. He’s scored one goal and notched an assist through two pre-season games and will get a chance to play on a new-look line with David Kampf and Alex Kerfoot in Monday’s tilt against Ottawa.

It’s all part of coach Sheldon Keefe’s plan to bring out the best in Kase’s potential.

“I see [Kase] as someone that can move up and down our lineup. I think he's going to challenge our players that are in our top six,” Keefe said. "I think he has a lot of defensive capabilities; he's really hard on the puck. He works hard. The line of Kerfoot, Kampf and Kase to me, that's three extremely versatile players that we can do various things with [in] whatever the game might call for on that particular day.”​

Keefe is trying to get Kase involved wherever possible, including on the penalty kill. Kase doesn’t have much experience there – he dabbled on the PK in Anaheim, but it wasn’t a regular role – but Keefe believes Kase’s work ethic and defensive acumen will translate well.

“I liked [the PK] when I played,” Kase said. “[As a team] we like to forecheck and I think I’m good at that, it’s important to me. And I like on the PK. You’re always trying to get the puck back, so I think it can be great.”

While Keefe wants Kase doing a lot, he’s also cognizant of how past problems could easily resurface. When the Leafs first signed Kase, Keefe said he had “great curiosity” about how Kase’s health would stand up over a full schedule and has since put practices in place to make sure his forward is well taken care of.

“I was really excited about [his play], and he's delivered on that. The health is something we've got to be really smart with,” Keefe said. “The medical team is on top of it. They speak with him daily and make sure that we're trying to create an environment around him that is having him prepared for the season, but yet at the same time making sure that we're conscious of how he's feeling, and that we build up a foundation here that [gives] you the confidence he can just go out and play.”

Keefe said at this stage there’s been no reason to limit him Kase and believes that can continue.

So does Kase. After sitting on the sidelines for almost all of the past year, he’s looking to roar back with a vengeance, and start filling the net opposite Campbell’s with plenty of pucks.