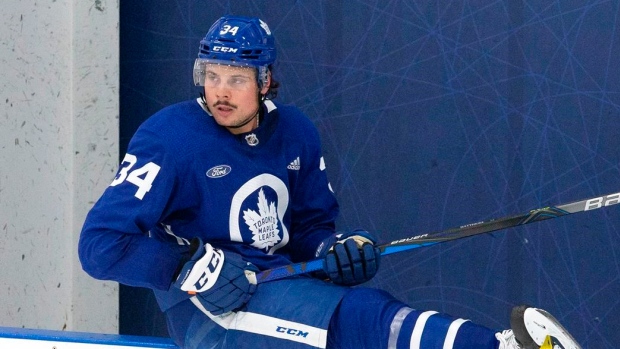 TORONTO — Auston Matthews waited until he was ready. Finally, that time has come.

The Maple Leafs’ star anticipates making his season debut on Monday, when Toronto hosts the New York Rangers. It’s been a long road for Matthews, from offseason wrist surgery on Aug. 13 to admitting he hadn’t reached his goal of being 100 per cent healthy by the Leafs’ opener last Wednesday.

Sitting out the Leafs’ first three games wasn’t an easy choice, but it’s one Matthews knows can pay off.

“It's been good to just stay patient and make sure I'm feeling fully confident, which [after] taking a little bit of extra time I absolutely do,” Matthews said after the Leafs’ practice on Sunday. “I'm pumped. It’s been not a lot of fun watching. I've been itching to get back in.”

Matthews elected to undergo the wrist procedure after the nagging issue that forced him to miss four games last season simply didn’t heal like he’d hoped. The recovery process cut into his summer training and forced Matthews to miss parts of the Leafs’ training camp sessions and the entire preseason schedule.

But cleaning up that problem was paramount in the bigger picture of Matthews’ career, and he acknowledged that post-surgery he doesn’t expect it bother him again.

Matthews said there wasn’t one moment specifically where he felt sure that a return was imminent, only that it was a combination of factors.

“I think it was just a progression throughout the week [working with skill coaches],” he said. “And just how I felt physically in my body, and mentally, all that stuff.”

Matthews is already coming off the most productive season of his career, where a 41-goal performance earned him a Rocket Richard Trophy. Throughout the recovery process, Matthews has zeroed in on different aspects of his game to improve and now aims to show how he’s evolved as player.

“I just want to continue having that consistency every single night. It’s hard to do night after night,” he said. “And that's why the best players are the best players for a reason, because it's easier to be good for a week or a month but it's really hard to be good night after night consistently so that's really all I focus on is being prepared.”

Coach Sheldon Keefe had Matthews slot onto the Leafs’ top line between Mitch Marner and Nick Ritchie for practice. Even when Matthews didn’t feel up to being in the lineup, Keefe could see the fruits of his labour, and believes it will help take Matthews to that elusive “next level” as a player.

“His skating to me looks even better than it was a year ago, and I thought he skated better a year ago than he did two seasons ago,” Keefe said. “He's changed his body, his training, but he's also committed a lot more time to working on his skating given that he couldn't handle pucks [after surgery] and he looks a lot quicker out here than what I've seen him before in the past. Those are the kinds of things that just add another layer to this game.”

The Leafs have gotten off to a 2-1-0 start with Matthews, and now that he’s back there’s more opportunity for success at both 5-on-5 and the power play. Matthews was back on Toronto’s top unit there with Marner, John Tavares, William Nylander and Morgan Rielly, and said his presence should “open up space for someone” and allow the Leafs’ special teams more chances to score.

Matthews should also help the Leafs’ top line do more damage on the scoresheet. Through those first three games, Ritchie and Marner have come up empty offensively. Matthews’ skill set, on both side of the puck, should help turn that around. Once he gets back in the groove, of course.

"The biggest thing I think is just that he's valued [his defensive game],” said Keefe. “He’s recognizing how important it is not only for the team and what it does to keep the pucks out of our net but it also gets them pucks back quicker and gets them on offence. I think making that connection for him has made a lot of sense, and then he's a big strong guy with great instincts and great stick speed. He's got all the tools.”