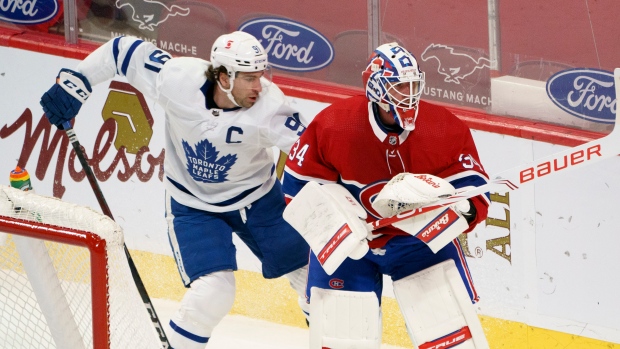 TORONTO — It’s been 42 years since the Maple Leafs last drew the Montreal Canadiens in a playoff series. It’ll be at least a few more days before the Leafs start dissecting their first-round opponent.

Even though the stage is now set for Toronto and Montreal to clash in the postseason for the first time since 1979, the Leafs still have two regular-season games to get through. The penultimate one is Wednesday in Ottawa, and Toronto isn’t looking past the Sens.

“I'm just going to focus on the Ottawa Senators here today,” said coach Sheldon Keefe after Wednesday’s morning meetings. “If I answer those questions [about Montreal] now, what are you going to ask me for the next eight or nine days before we start playing? It's nice to know who the opponent is going to be, but we didn't even bring it up or discuss it [with the players] this morning.”

And Keefe noted, the Leafs have been on a collision course with Montreal for some time.

There’s no shortage of storylines wrapped up in the forthcoming series, most of which are tied to the historic decades-long rivalry that binds these Original Six clubs together.

Toronto has faced Montreal 757 times in the regular season, with a record of 307-344-88-18. There would have been more meetings had the NHL not placed the Leafs in the Western Conference for 17 seasons from 1981-98, pitting them against the Habs only two or three times per year.

It was before that, in April 1979, that Toronto tussled most recently with Montreal in the playoffs. The Leafs were bounced from that series in four straight losses.

Fast forward to this pandemic-shortened season, and the Leafs and Habs have more than enough intel on each other to make for an intriguing first-round matchup. Toronto has already played Montreal 10 times, posting a 7-2-1 record. Five of those games were decided by a single goal, and the Leafs outscored Montreal 34-25.

That success could fuel Toronto in its next chapter, at a time of year where they've struggled lately. The Leafs lost in the first round of three straight playoff series from 2017 to 2019, and then failed to qualify for the NHL’s playoff tournament last summer.

Suffice it to say, there’s a lot to talk about what’s next for Toronto. And they’ll get to it, eventually.

“I'm sure [the series is] going to create a lot [of buzz], but we have two games [left],” said Mitch Marner. “I’m not going to talk about the series until the series [comes about]. I don't really want to look ahead too much. We've got to make sure we play these two games hard and focus.”

“It's the Leafs versus the Habs. It's everything you want in a playoff series I guess,” said Travis Dermott. “We've played them a fair amount of times and got a good feeling there, but we want to take these next two games in stride, really focus on the things that we think are going to be important once playoffs come, make sure we have those areas dialled in, and really make use of these last two games.”

In order to do that, Keefe won't be resting anyone on Wednesday. He also expects to have Nick Foligno (upper body) and Justin Holl (undisclosed injury) back in the lineup.

"Our guys are going to go here today," Keefe said. "I'll probably manage the minutes a little bit differently than I would in other types of games but at the same time, it's a good chance for us to really work on our four-line game and we're really looking to get things moving with the entire group."

The Leafs have aimed to stay even-keeled throughout this lead-up to playoffs. Even when Toronto clinched the division in last Saturday’s win (over Montreal, naturally), players showed up hungry to keep improving at this week’s practices.

“The guys were happy [to clinch], but you could just sense that there was unfinished business,” said Keefe. “They knew that was part of the process but that's certainly not the goal. We've had a couple great practices here leading up to today. It's been very businesslike in terms of our approach. There are two games remaining on the schedule and there's an opportunity for us to continue to climb in the league standings. That would be motivation for us to continue to push here.”

Toronto currently sits seventh overall in the NHL standings with 76 points, and could technically still win the Presidents’ Trophy. That scenario would involve the Leafs beating both Ottawa on Wednesday and Winnipeg on Friday, and having Vegas and Colorado lose their three remaining games in regulation.

It’s unlikely to happen, but a carrot nonetheless for the Leafs to chase. Plus, these final games are the best tune-up Toronto can get before a long layoff leading up to the playoffs starting.

Because Vancouver’s COVID-19 outbreak forced an extension of the North Division schedule into next week, the earliest possible date for the Leafs first playoff game is May 19.

“It looks like it's going to be late into next week before we get going so that's a large gap,” Keefe said. “And we've got to stay sharp, stay game-ready here, so these two games are important for that.”

Wednesday will be an especially big night for Frederik Andersen. The goaltender will see his first NHL action since March 19, after which he was sidelined by a recurring knee injury. Keefe already stated Jack Campbell will start in Friday’s regular-season finale, so it’s the only appearance Andersen will see before playoffs.

Whether it’ll be Campbell of Andersen manning the net in Game 1 against Montreal is yet to be announced. Right now it’s enough for Andersen and his teammates that he’s healthy enough to get back in at all, and potentially giving the club options for what’s ahead.

“He's a big part of this team. He does a lot for us when he's in the net,” said Marner. “We know what kind of goalie he is in that net for us and what he brings to this team confidence-wise. He's grinded, he's worked his butt off to get back into the shape where he thinks he's the best possible goalie he can be and we're excited for that and we're excited for him.”