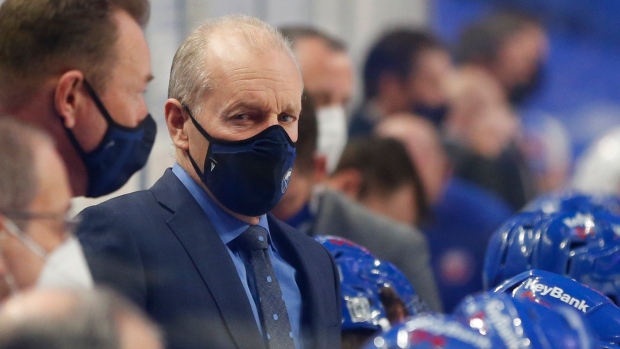 The trouble with the Buffalo Sabres’ sudden inability to score has more to do with players’ heads than hands, as far as coach Ralph Krueger is concerned.

“One of my biggest takes out of that game yesterday was the fragile psychological state of the team right now,” Krueger bluntly said Friday, a day after a 3-1 loss at Washington.

“They’re fragile right now. They don’t believe in themselves and they don’t see themselves celebrating.” he added. “They see themselves missing the net, hitting the shaft of the goalie, not finding the hole between the legs that they usually find.”

Krueger spent a brief practice having players focus on puck-handling to work on their timing, while also preaching positive messages during numerous one-on-one conversations.

The Sabres are in a funk and there are few signs of when they’ll climb out of it in preparing to play at the New Jersey Devils on Saturday.

In dropping three straight since returning from a two-week COVID-19-forced break, Buffalo has scored just twice — both power-play goals — and went an entire period without generating a shot on net in a 3-1 loss to the New York Islanders on Monday.

It’s not as if the Sabres were over-powering opponents before their season was paused. In opening 4-4-2, Buffalo managed just 28 goals, with a league-low 15 scored in five-on-five situations. The lack of scoring has led to Buffalo giving up the first goal in 10 of 13 games this season.

Buffalo is instead led by third-year player Victor Olofsson’s six goals, five of which have come on the man advantage.

Time is already beginning to run out in a shortened 56-game season in which Buffalo’s troubles are further exacerbated by a constricted schedule which leaves little room for practice. As a result of having six games postponed, the Sabres are playing their final 46 games in 83 days, and won’t enjoy their first multiday break until April 4-5.

Buffalo is in the midst of a nine-season playoff drought, the NHL's longest active streak, and one short from matching a league record.

The most troubling part of Krueger’s assessment was the difficulty he had explaining how the confidence the Sabres’ are generating from their power-play production isn’t carrying over to even-strength situations.

“I’ll be really honest with everybody here that I’m trying to figure that out,” he said. “It’s no easy fix, but if we do get that momentum, we will be strong.”

Eric Staal, who has three goals, said it’s important everyone simplifying their game.

“There’s definitely some fragility there when teams are not finding success,” Staal said. “There’s guys pressing. There’s guys that want it real bad. But there’s a way and I think a simpler way that we can get there. Hopefully, that starts tomorrow.”

Krueger didn’t provide a timetable in saying veteran defenceman Rasmus Ristolainen faces “a long process” before he can return after experiencing a severe bout with COVID-19. Krueger also said Ristolainen has experienced a setback in his recovery.

Of Buffalo’s nine players affected by the recent outbreak, Ristolainen spent a team-high 14 days on the NHL’s COVID-19 list. In being cleared to skate on Wednesday, he was not expected to join the team for its current four-game road trip, which closes at New Jersey on Tuesday.

On Friday, Ristolainen revealed he experienced chest pains and significant drops in oxygen levels in a story published by the Finnish newspaper Ilta-Sanomat.

“When there was chest pain, it felt like my heart was cracking as I walked up the stairs,” Ristolainen said, according to a Google translation of the story printed in Finnish. “A couple of evenings there were such conditions when I went to bed that I didn’t know if I woke up here anymore in the morning.”

Defenceman Jake McCabe, who also tested positive, said he and Ristolainen texted each other while they dealt with the affects of the virus.

“Risto’s probably the fittest guy on our team,” McCabe said of his teammate, who normally leads Buffalo in ice time. “For him to battle like this, it’s very tough and unfortunate. But knowing Risto, he’s going to be just fine, and he’ll be back here hopefully soon.”