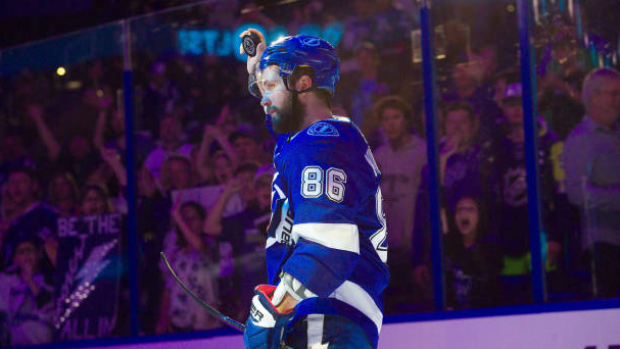 With 18 points in his past five games, Nikita Kucherov is on pace to become just the third NHL player to post more than 130 points in a season in the past 25 years.

Most Points in a season since 2004 lockout

Colorado Avalanche winger Mikko Rantanen was on the same record pace in December, but his production has slowed. Rantanen has just two points in nine games this month and he's now on pace for 106 points.

With 40 points in 19 games since the calendar turned to 2019, Chicago Blackhawks winger Patrick Kane has entered the race for the Art Ross Trophy and is currently on pace to fall just one point shy of Thornton's 2005-06 total.

Edmonton Oilers captain Connor McDavid, who won the Art Ross Trophy last season with 108 points, is on pace for a career-best 118.

*Projected based on stats to date this season

Kucherov has at times been overshadowed by bigger names in Tampa Bay, including captain Steven Stamkos, but the 25-year-old is now on pace to lead the team in points for a fourth straight season. He scored two goals and posted five points in Tampa Bay's 5-1 win over the Columbus Blue Jackets Monday night, and the performance certainly didn't go unnoticed.

"He's a special player," Lightning head coach Jon Cooper said. "The night when you are not your best, the team is not at its best, a big-time player came to play and our goaltender held us in. We felt pretty fortunate to come away with two points tonight."

"When he's wheeling like that he's a real tough player to defend," Tampa Bay centre Brayden Point added. "Every time he's on the ice he makes something happen."

Kucherov posted a goal and two points in the Lightning's 3-0 over the Montreal Canadiens on Saturday, hours after drawing praise from Claude Julien.

“He’s just a good player, smart player,” the Canadiens head coach said. “When the puck’s on his stick, he’s a very dangerous player and that’s his strength. You just have to look at his stats to see that stuff. For us, if we play the right way and we keep him playing in his own end, that’s to our advantage.”

Led by Kucherov, the Lightning are the NHL's best team this season by a 15-point margin. Through 60 games, Tampa Bay has a 45-11-4 record and continue to close on 100 points, currently at 94.

Kucherov, meanwhile, is just one point away from reaching the 100-point mark for the second time in his career and continues to prove the value in the eight-year, $76 million contract extension he signed last July instead of hitting free agency this summer.