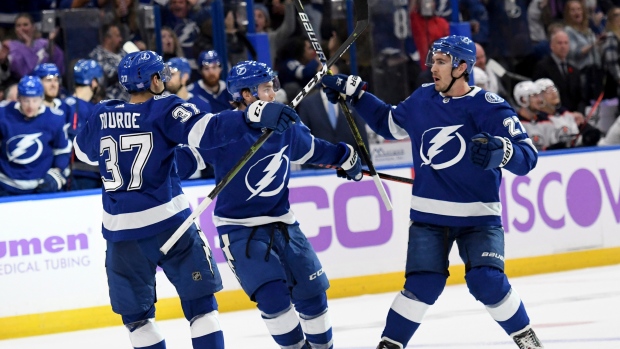 Nikita Kucherov had two goals and an assist, Andrei Vasilevskiy made 33 saves and the Lightning beat the Oilers 5-2 on Tuesday night.

"They've got a fun team to watch," McLellan said. "We're all chasing them right now, but I think we can get there."

Steven Stamkos had a goal and two assists, and Brayden Point and Yanni Gourde also scored for the Lightning, who have the best record in the NHL at 11-3-1.

Edmonton got goals from Ryan Strome and Leon Draisaitl, and Mikko Koskinen stopped 30 shots. Connor McDavid was kept off the scoresheet for just the second time this season as his eight-game point streak ended (six goals, five assists).

Kucherov has eight goals and 14 points in nine games against Edmonton.

Vasilevskiy made a diving stop on Ty Rattie, who got his scoring chance in the first period off a nifty pass from McDavid. Vasilevskiy also had an in-close save on McDavid shortly after Edmonton kept the puck in the offensive zone for all two minutes of a second-period power play.

Vasilevskiy has allowed two or fewer goals in eight of 11 games.

"He's undoubtedly the reason why we win a lot of hockey games," Stamkos said. "He was outstanding again tonight."

Stamkos opened the scoring 4:40 into the game before Point got his ninth goal on a rebound to make it 2-0 with 25.1 seconds left in the period.

After Strome got his first goal in 24 games at 12:32 of the second, the Lightning went back up 3-1 just 47 seconds later on Gourde's redirection.

Kucherov put Tampa Bay ahead 4-1 off a pass through the slot by Stamkos with 1:01 to go in the second.

Draisaitl scored a power-play goal 40 seconds into the third off a nifty backhand pass by Rattie.

Kucherov had a power-play goal midway through the third.

Edmonton's Milan Lucic got minor penalties for interference and roughing, and a 10-minute misconduct following a hit on Mathieu Joseph at 9:31 of the third.

"He felt that a player took a liberty with (defenceman) Kris Russell, and I agree with the liberty part of it," McLellan said. "Part of the reason we have Luc here is to take care of teammates and he did that."

NOTES: The Lightning have won seven in a row at home against Edmonton. ... Former Tampa Bay forward John Cullen dropped a ceremonial first puck on Hockey Fights Cancer Night. Cullen was able to play again after missing the 1997-98 season for treatment of Non-Hodgkin lymphoma. ... Lightning D Victor Hedman (shoulder) and LW Ondrej Palat (foot) both missed a sixth consecutive game. Neither is skating with the team in practice. ... Rattie (upper body) returned after missing eight games. . Russell was a minus-4.