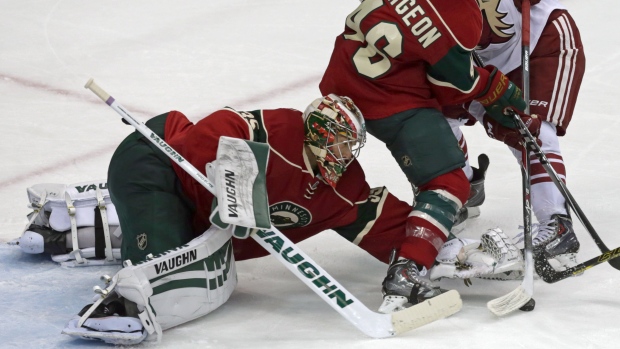 ST. PAUL, Minn. - Even with the schedule working against him, Darcy Kuemper has been on a roll to start the season.

Kuemper made 26 saves for his third shutout of the season, and defenceman Jared Spurgeon had two assists to lead the Minnesota Wild past the Arizona Coyotes 2-0 on Thursday night.

The Wild have played only five games this season and have already endured breaks of six and four days in the first two weeks. But after a slow start, the Wild got second-period goals from Charlie Coyle and Jason Pominville to snap a two-game losing streak.

"You could tell that we hadn't played in a little while. It'll be nice here to play more games and get into a little bit more of a rhythm," Pominville said. "A lot of time off is fun to rest the body but we want to play. Practice is fun, but not that fun."

Kuemper has allowed just two goals in four starts, and has all three of Minnesota's victories this season.

"I thought he was really good. What I really liked was just how he's following the play," Wild coach Mike Yeo said. "I just thought he was very involved in the game, and obviously he got rewarded for it."

Arizona's Mike Smith entered the game having allowed at least four goals in each of his three starts this season. But he stopped 27 of 29 shots and blanked the Wild for all but a three-minute stretch early in the second period.

"I was hoping for a shutout. But it was better," Smith said. "The outcome is disappointing, but we were in the hockey game at least."

Coyle opened the scoring with his second goal of the season, and Pominville made it 2-0 less than four minutes later.

Smith stonewalled Zach Parise on a point-blank shot a minute and a half into the second, then smothered Parise's wrist shot from the left circle at the end of that shift.

But a minute later, Minnesota jumped ahead when Coyle redirected in Spurgeon's wrist shot from the high slot. Pominville doubled the lead when he completed a crisp passing play from Spurgeon and Parise by firing a slap shot that beat Smith over his right shoulder.

Arizona appeared to have cut its deficit in half early in the third period when Kyle Chipchura slipped a shot past Kuemper, but B.J. Crombeen was in the crease, and the goal was disallowed due to interference.

"I haven't looked at it yet but it looked like he went in the crease," Coyotes coach Dave Tippett said. "They were pretty definitive on it. I'll have to get a look at it, but it's one of those things that you just have to deal with and move on."

Minnesota's power play woes continued, as the Wild went 0-for-3 to fall to 0-for-19 to start the season. But the Wild's penalty-killing unit maintained its strong play, blanking Arizona on two power plays. Minnesota has killed 14 of 15 penalties this season.

"We had a lot of good looks," Spurgeon said of Minnesota's power play. "They're just not going in for us right now. We've got to work on it and have got to bury them. That will be a difference in some games."

The Coyotes went on the power play with 7:30 to play when Spurgeon flung the puck over the boards in his defensive zone, but the Wild's Matt Cooke had the best scoring chance in the next two minutes as he narrowly missed converting an open-net opportunity with Smith out of position.

The Wild looked sluggish after their latest layoff and Arizona outshot Minnesota 6-2 in the opening five minutes. The Coyotes dictated the pace through much of the first period but the goalies kept it scoreless.

"It was nice just to get out of the first period and not have the light come on behind me," Smith said. "It's been a while since that happened."

NOTES: Arizona C Martin Hanzal missed the game with a lower-body injury. Coyotes RW David Moss left the game in the second period with an upper-body injury and didn't return. ... Minnesota was down a pair of defencemen as Keith Ballard and Christian Folin sat out because of illness.