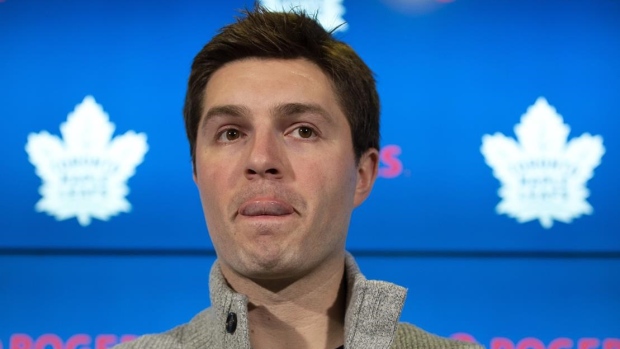 Toronto Maple Leafs general manager Kyle Dubas told TSN Hockey Insider Pierre LeBrun in The Athletic that he elected not to adjust his roster at the trade deadline partly because he did not see an opportunity to solve the team's long-term needs on defence.

Dubas received calls on pending unrestricted free agent Tyson Barrie ahead of the deadline last month, though TSN Hockey Insider Bob McKenzie noted the team was looking for a right-shot defenceman as part of the return in a deal. Ultimately, Barrie remained with the team and is scheduled to hit the open market in July along with fellow right-handed defenceman Cody Ceci.

The second-year general manager noted, though, that injuries to Morgan Rielly, Jake Muzzin and Ceci have provided the organization with an opportunity to test their depth and see, potentially, their blueline moving forward.

"Yeah. The balance was, it’s a long-term need for us. We just didn’t see a long-term solution that fit what we were looking for there," Dubas told LeBrun. "On the left side, by and large, we’ve got it fairly set for a number of years. We’ve got Morgan (Rielly) and Jake (Muzzin), we’ve got Travis Dermott, Rasmus Sandin. On the right side, we’ll have Ceci and Barrie that we’ll have decisions on as UFAs. You have (Justin) Holl who we obviously like, he’s had an excellent year. We’re very happy for him. And then you have Dermott who can play there and (Timothy) Liljegren. So maybe this (the injuries to Rielly and Muzzin) was a blessing in disguise, now we get a chance to see what these players can do in increased roles.

"So far so good with Travis and Justin paired together, whether it’s been Martin Marincin or Rasmus with Tyson Barrie, they’ve played well; and now we’ve got Calle Rosen back in the fold as well. Our depth there, we feel it’s been good, and it’s obviously been tested with the three guys out. But there are teams in the league that deal with far worse than us in injuries - Columbus and Pittsburgh, who we’re competing with, most notably. So for us, it’s a great chance to test our depth and really get a stronger measure of where we’re going to be at come the draft."

The Maple Leafs are expected to get relief on defence perhaps as soon as next week as Rielly and Ceci close on their returns to the lineup. Muzzin was given a four-week timeline for recovery after sustaining a broken hand last week.

Speaking after the deadline passed, Dubas pointed to the team's performance as one reason for standing pat, calling their play "a Jekyll and Hyde type of [thing]." The Maple Leafs responded with three wins before Tuesday's loss to the San Jose Sharks, but the general manager told LeBrun he isn't taking credit for their improvement.

"I don’t think the press conference had anything to do with it," Dubas said. "I think the guys have their own sense of pride in themselves and in the program. And they don’t want to have nights like that. They know what they’re capable of. They know what their potential is. I think now we’ve come to our part of the evolution where we know that it’s going to be hard. Not to say that we aren’t going to have more hard nights and hard weeks and hard months, but I think they realize how hard it’s going to be and at that stage, you just see whether the team is going to embrace it and go through it or whether they’re going to go meekly. Last week I thought was a great start to a response, but we still have a long way to go here. But it was a very, very encouraging week. We’re hopeful and we’re working towards just continuing on this week."

Toronto currently sits third in the Atlantic Division, five points ahead of the Florida Panthers who have a game in hand. The Maple Leafs will face the Los Angeles Kings on Thursday night with goaltender Frederik Andersen in net, while Jack Campbell, who Dubas acquired from the Kings along with Kyle Clifford in early February, will start Friday against the Anaheim Ducks.