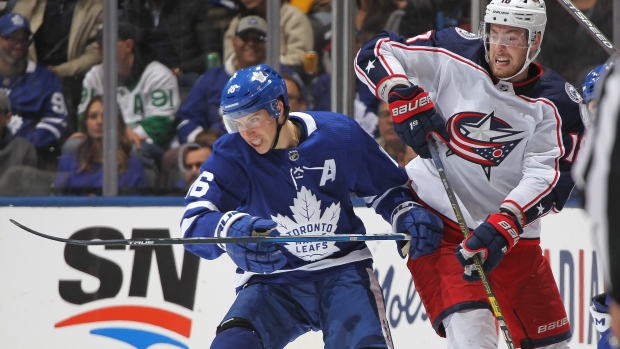 TORONTO — It’s unclear when the next NHL regular season will begin, but at the start of a week that includes both the 2020 Entry Draft and the opening of free agency, Maple Leafs general manager Kyle Dubas is focused on adding more grit to his lineup.

“We would like to be incredibly hard to play against. It is a priority of ours,” Dubas told reporters on a Zoom call Monday morning. “There's no doubt that it is something we would like to address through free agency or through trades that come up. Some of that also does have to happen organically as our [current] players continue to mature and grow. The playoffs this year showed a number of teams with examples of their own guys altering their mindset and having some setbacks that have forced them to play a different way at times.”

The Leafs had plenty of time to watch the NHL’s postseason unfold this year, after failing to advance from their qualifying-round series against Columbus. Those early exits have piled up on Toronto the past four years, and this one in particular raised questions about how the Leafs should proceed with their roster in what will be a flat salary cap world for the foreseeable future.

One major name under scrutiny was starting goaltender Frederik Andersen, who was solid in Toronto’s best-of-five loss (.941 save percentage) but ultimately got outplayed by the Blue Jackets’ tandem of Joonas Korpisalo and Elvis Merzlikins.

There’s still one year remaining on the 31-year-old Andersen’s five-year, $25 million contract, and Dubas was clear that, despite the rumours, neither party is ready to move on.

“As of this moment, I expect [Andersen] to be the starting goalie for our team whenever we get going here,” Dubas said. “I know where the Fred speculation started and comes from, and rather than address it publicly or be hostile about it, I just addressed it directly with Fred. So he and I have had many discussions over the last month or so about that. He knows where we stand directly.”

First on his agenda will be tackling the NHL’s virtual draft, beginning with the first round on Tuesday and continuing through the remaining six rounds on Wednesday. Toronto holds 11 picks, including the 15th overall selection acquired last month from Pittsburgh in the trade of Kasperi Kapanen.

And then there’s free agency opening up on Friday, where the Leafs could be active. Unlike years past, Toronto doesn’t have any big-name free agents to contend with, but did lock up one of their own early Monday with a one-year, $700,000 extension for pending UFA Jason Spezza.

The 37-year-old Toronto native notched 25 points (nine goals, 16 assists) in 58 games for the Leafs last season. Spezza met with Dubas and Leafs head coach Sheldon Keefe as soon as team’s season ended to discuss the possibility of a return.

“[Spezza] and I had a great conversation and then he subsequently had a discussion with Sheldon about his role and what was expected of him and what he could expect from [us]. It was just a great fit,” Dubas explained. “His work ethic, his passion for the game, and the fact that he desperately wants to win for obvious reasons [is great]. And that he's willing to spend as much time as any young player wants in helping them work through various challenges in their career…we’re fortunate to have him around here for another season.”

As for how the rest of free agency might shake out, Dubas said it's too soon to tell. He hasn’t even landed yet on which of the Leafs restricted free agents will be qualified before the deadline on Wednesday afternoon. Instead he’ll be waiting to see what other players don’t receive qualifying offers around the league, and factoring those names into Toronto’s overall plan.

The club’s draft plan is a bit easier to forecast. At this point, Dubas has been underwhelmed by offers for the Leafs’ first-round pick, so there are plenty of options available on how they might proceed.

“We've had lots of different discussions on it, but nothing that I would say has been overly close,” he said. “I would classify it as lots of tire-kicking but nothing close as of yet that would really compel us to look to move it. We've got some final meetings here and we'll establish when and how we would make the pick or whether we'd move out of it – whether it's to go up in the draft to select something or back in the draft, or in a trade for players, but it's really all on the table right now.”

Given the ongoing COVID-19 pandemic, it will be a smaller-than-usual contingency of front office staff, headed by Dubas and Toronto’s amateur director of scouting, John Lilley, convening in the dressing room at Scotiabank Arena to watch Tuesday’s action play out on TV.

Dubas credited Lilley and his team for providing the group with ample amounts of content on potential prospects after international travel became impossible. In an unexpected twist, that lead to a more thorough review process than the Leafs would normally have leading up to a draft.

“Our scouting [staff] shifted everything to video and tried to maximize our coverage of every player,” Dubas said. “In terms of the amount of games we've seen on each player, this year would certainly be the best. In terms of the amount of deep work that's been able to be done on every prospect, this year far surpasses the previous years and we'll probably take some of the elements that we've learned this season ahead with us as things hopefully return to normal.”

Keying on players who could help the Leafs sooner rather than later has never been more paramount than it is now. The pandemic has forced the NHL’s salary cap to remain at $81.5 million for a least the next two seasons, and CapFriendly projects Toronto to have only $4.7 million in space for 2020-21.

The Leafs are confident this draft will be a deep one, which is part of what drew them to acquiring a first-round pick from Pittsburgh (Toronto’s own selection was traded to Carolina last June in the Patrick Marleau salary dump).

After weeks of hanging on the sidelines waiting for this fresh start, Dubas and company now have make good use of their preparations.

“We're excited about [the draft], it's a great opportunity for us,” Dubas said. “I think, for better for worse, the economics and the way that they've changed in the last number of months are going to put a major focus on development and having younger players that have tremendous talent try to get to the league as soon as possible. It's not to say that we would rush anybody unjustly, but I would say [the economics] are probably going to expedite [things] a little bit for all teams.”