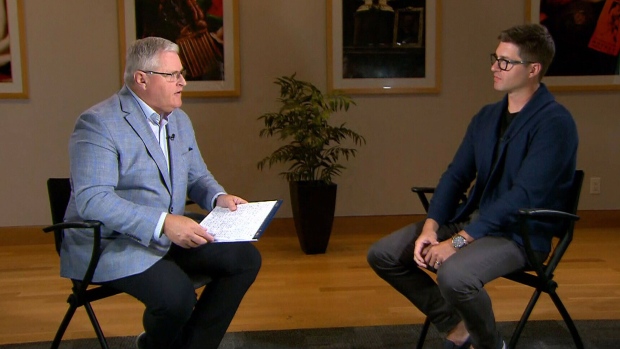 With training camp a week away, TSN Hockey Insider Bob McKenzie went one-on-one with Toronto Maple Leafs general manager Kyle Dubas to discuss the latest with restricted free agent Mitch Marner, the team captaincy and whether or not Mike Babcock enters the season on a short leash. Here are a few parts of the conversation that stood out.

What is the latest on Mitch Marner and the negotiations? That’s all Leafs fans want to know.

“Yeah, we’ve continued to have dialogue with Darren [Ferris, Marner's agent] as recently as last week. I think I would feel a little more anxious or perhaps look back and wonder whether we should have done anything different, but I think everybody in the league with these types of restricted free agents are in the exact same spot. The guys who are mentioned all the time, but even if you peel it back a level below and even the guys who aren’t mentioned all the time, they aren’t signed either.

There really hasn’t been a lot of movement in that market since July 1 when [Timo] Meier signed and when [Sebastian] Aho came off the board, so I don’t know how it will play out here. I would expect – in looking at it and looking at the history of these things ­– that some of it will start to shake loose and we’re certainly hopeful and we’ll continue to work towards having [Marner] be one of those players that signs in the coming week here.”

Training camp opens on Sept. 13. Do you think Mitch Marner will be signed and in St. John’s?

“It’s certainly our hope and our goal. I don’t think we want anybody to miss any day or training camp, period. So we’ll continue to work towards that and remain hopeful. As I’ve said throughout, I’m optimistic about it and we lived through it last year. We saw the effect of a player who missed training camp, missed exhibition, missed the first two months of the season and it’s tough. It’s tough to expect that player is just going to jump back in and be at the level that we expect – especially at the pay that they’ve previously earned from their previous seasons. And then when that doesn’t work well, then criticism flows in and it makes it even tougher.

So that’s our hope and our goal and I’m sure every team in the league with these types of players is in that same spot. You want your whole team there for training camp. We’re going to have some guys missing from injury, which we knew from before and you can plan for that and be ready for that, but we hope everybody else is there.”

Will there be a captain for the Toronto Maple Leafs this season?

“We’ll see. I think it’s always something that I have been very patient about and I think some people would say slow or too slow to do because the Toronto Maple Leafs need a captain. And I think last year, going through the year in this position rather than in the assistant GM position, it really allowed me to see the different qualities that are going to be needed in that role – how the person conducts themselves every day and really the fact that the person really needs to be present and ready every day to deal with the things that come along with it.

It’s not to say that [being the captain] in other markets carries less prestige, I just think that it’s different here in that the player goes out and serves as the voice of the team to a strong media contingent pretty much day in and day out. They can’t take any days off from it, they can’t hide from it. And I think just needing somebody who is calm and stoic and ready at all times. We’ve got some great candidates in there and I think that’s the second part of it. Once accepting that you do want to have a captain of the team to serve as the central figure, we’re fortunate that we have a few players that can fill that void and then it’s trying to determine what’s best for the future of those players and for the group.”

At the end of the season there was a little bit of a delayed vote of confidence that fed into the narrative that you didn’t hire Mike Babcock and he’s not your guy. As you go into this season there’s all sorts of talk about Leaf fans saying ‘He’s got to be on a short leash.’ And quite aside from whatever the dynamic might be between the general manager and the head coach, the mere fact that the team’s lost in back-to-back first rounds against Boston that there’s a sense that this is the year that the coach needs to make something happen. What’s your reaction to all that kind of talk?

“I think in the future I just won’t answer at the press conference in terms of a day after the season ends and I still feel that same way. I hadn’t had a review from Brendan [Shanahan] and from our owners about the job that I had done, so I’m more patient and don’t like to give anything one way or the other the day after something is fresh.

I just think it’s a poor way to give – it’s a poor way to evaluate anything is to do it right when the event is just ended and not reflect on it, not have time to go back through the year. So I understand why it maybe created some of the action that it did, but it wasn’t my intention by any stretch of the imagination and you go back through the year and you look at it and we’ve had back-to-back 100 point seasons and last year we got off to a great start to the season and in the second half of the year we faced our challenges. But I think if you look at the two playoff series, I know we lost in seven games in both of them. I think they were very different series.

I thought the year before, you know the first two games in Boston and then even the fifth game which we won, we were badly outplayed at times in the series. I think this year, if you want to evaluate it solely on how the season ended in both years, you can look at the point total which was a little bit less, [but] you can look at the way that we played in that series against Boston and I thought we were much better this season. We had the chance coming home to win the series and got the lead early and just couldn’t stick with it and Game 7 we didn’t play overly well, but I thought overall it was a better series than the year before just in terms of how close we were to them and whether we were the better team in a certain number of games or not. It was a series between two very close teams.”

Here is the full sitdown interview: