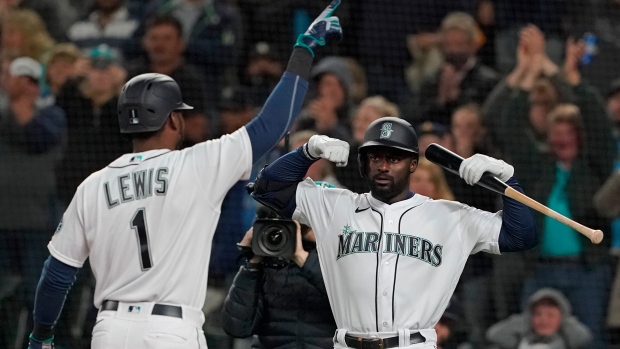 Logan Gilbert tossed seven impressive innings of four-hit ball as the Mariners won consecutive games for the first time since a four-game winning streak from April 22-26.

It was the first shutout of the season for Seattle. Houston was held to three runs or less for the eighth time in 12 games.

Gilbert (5-2) went seven innings for the third successive start, but picked up his first win since May 1 against Miami. In his past three outings, the right-hander has allowed a total of six earned runs over 21 innings with 18 strikeouts.

After taking a 1-0 lead in the first on J.P. Crawford's RBI single, Seattle added two more runs in the second thanks to a long homer from Lewis that clanked off the front of the left-field bleachers and was projected at 420 feet.

The home run was Lewis’ second of the season. His first came on Friday against Justin Verlander, one of four given up by the Astros ace.

Eugenio Suarez had an RBI single in the fourth inning and the Mariners added two more in the fifth on Ty France's two-run single. France had two hits and extended his hitting streak to 10 games.

Houston starter José Urquidy failed to make it through the fifth after allowing a single to Rodríguez, and was pulled after 4 2/3 innings. The hit was Rodríguez's third hit and fourth time on base.

Urquidy (4-2) allowed 12 hits and five earned runs with two walks and four strikeouts. It was the second time this season he's given up 12 hits in a game — the other was May 17 against Boston.

Mariners: RHP Ken Giles (finger), whose scheduled rehab outing for Triple-A Tacoma was rained out Saturday, will most likely have four to five outings between Tacoma and Class A Everett before making his season debut. ... RHP Erik Swanson (elbow) threw a bullpen as he works his way back from right elbow inflammation. ... INF Abraham Toro (shoulder) is scheduled to be sent out on a rehab assignment early next week if he continues to progress well from a sprained left shoulder.