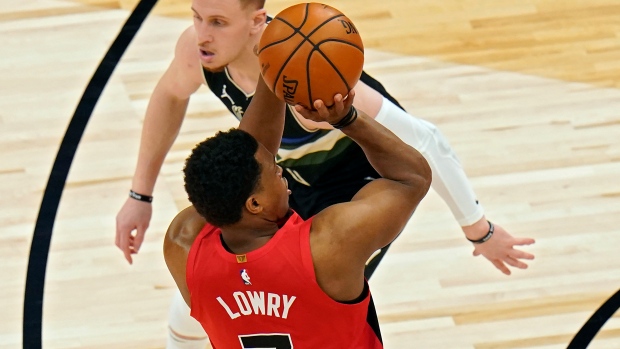 TAMPA, Fla. — Kyle Lowry became the third player to reach the 10,000-point milestone as a Raptor, scoring on Toronto's second shot attempt against the Milwaukee Bucks on Wednesday.

Lowry sank a three-pointer from 24 feet just 51 seconds into the game after a steal by Fred VanVleet.

Lowry actually came into the game with 13,730 points, having scored 1,217 in two-plus seasons with Memphis and 2,515 in three-plus campaigns with Houston.

"He's had a heck of career and this is another landmark," Raptors coach Nick Nurse said before the game at Amalie Arena.

"I think he's made himself into a heck of a player and the scoring part of it is what he's worked on," he added. "He's improved his shooting going both ways. He's improved the depth of it. He's improved his finishing at the rim. And that all adds up to him getting to a special landmark of 10,000 (points).

"A hell of a player in a Raptors jersey, that's for sure."

The 26-year-old Antetokounmpo reached 11,000 points for his career on Sunday against the Atlanta Hawks, becoming just the sixth player in Milwaukee franchise history to reach 11,000 points.

Lowry had been ejected in the dying seconds of the Raptors' previous game, a 129-114 loss in Indiana on Monday. The six-time all-star had missed the two games before that with a foot injury,

This report by The Canadian Press was first published Jan. 27, 2021