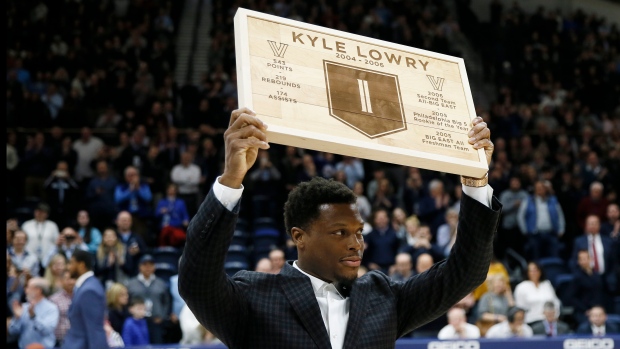 VILLANOVA, Pa. — Kyle Lowry was as headstrong as any Villanova star to wear the uniform, and nearly wore out his welcome with coach Jay Wright before he ever hit the court. The two have since become extremely tight, and when Lowry returned for a night in his honor, Wright requested a picture with Lowry and his two young sons, and a trio of former Wildcats. When the fussy kids were still shooting hoops, Lowry wrangled them over for a quick picture.

“They listen way better than you did,” Wright cracked.

The photo opp still fresh in his mind, Wright smiled as he said, “That was my favorite part of tonight.”

But No. 12 Villanova’s 70-61 survive-to-the-finish victory over St. John’s on Wednesday night was certainly a close second. The Wildcats had 13 turnovers, two offensive rebounds, and trouble shaking the Red Storm until late on a night the program saluted Lowry. Lowry, a five-time All-Star guard for the NBA champion Toronto Raptors, might have provided a dose inspiration for the young Wildcats (22-6, 11-4 Big East).

“We were commentating on his toughness and competitiveness,” Wright said. “That’s something the young guys have to learn.”

Saddiq Bey hit four 3-pointers and scored 23 points and Justin Moore had five 3s for 21 points for the Wildcats.

St. John’s came in 12½-point underdogs and kept the deficit within single digits for most of the second half. Greg Williams Jr. buried a 3 for the Red Storm (14-14, 3-12) with 4:37 left that pulled them within six.

Moore, though, steadied the Wildcats with his fifth 3 of the game, a driving layup and a pull-up jumper in succession that stretched the lead to 13 and sealed another win for the perennial Big East power.

Lowry made plenty of big plays in his two seasons with the Wildcats as one of the early pieces that helped build Wright’s program into a national power.

Lowry was flanked by former teammates and called the jersey recognition honor a “once in a lifetime” experience that he was able to share with his wife and two young sons. His sons, Karter and Kameron, played with the microphones at a halftime press conference.

Lowry played from 2004-2006 when the Wildcats made their first two NCAA Tournament trips of Wright’s young tenure.

“From the time I got here, he was kind of on that proverbial hot seat,” Lowry said. “Now, he’s never going anywhere and he’s one of the best coaches in the history of college basketball.”

Wright has since won two national titles at Villanova and was named the AP Coach of the Decade. Wright has said how Lowry skipped classes and was disruptive at practice, so much so that it got to the point where the feisty guard might not have made it to a second season. Lowry laughed when he recalled his rocky relationship with his coach.

Villanova hit seven 3s to St. John’s one in the first half but only led 36-34 at the break.

St. John’s is just counting down the days until the season ends. Barring an improbable run to a championship in the Big East Tournament, the Red Storm are looking for the future. They played their fourth straight game without Mustapha Heron (13.8 points) because of a sprained right ankle.

“We’ll win ballgames,” Anderson said. “We’ve got three more on the schedule. That’s our intention, to go and get better.”

Villanova won its fifth straight game and has a big rematch against No. 13 Seton Hall ahead on March 4. Seton Hall won the first meeting and both teams could meet again in a conference tournament title game.

Lowry had a staredown with former Wildcat Donte DiVincenzo, the most outstanding player of Villanova’s 2018 title team, after a hard foul in Toronto’s game against Milwaukee on Tuesday.

“Donte better cut that stuff out,” Lowry said with a laugh. “That’s my guy, though. I fouled him hard and he didn’t like it. It’s all in the competitive nature. I love Donte and what he’s doing. He’s having a great year. Hopefully, we see them in the playoffs.”

The Wildcats play Providence on Saturday at Wells Fargo Center.