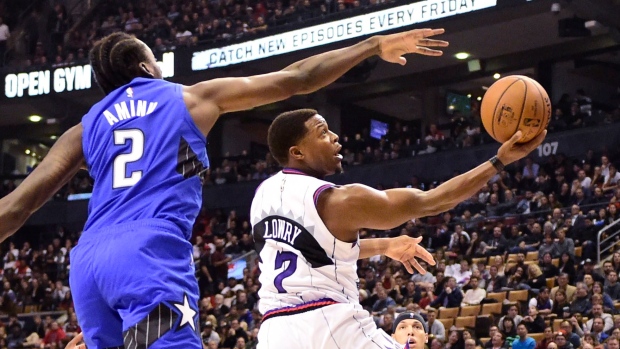 TORONTO — If Kyle Lowry is having a hard time getting up to speed, it's not showing. He isn't telling, either.

Lowry had 26 points, six assists and five rebounds as the Toronto Raptors held on for a 104-95 win over the Orlando Magic on Monday. The 33-year-old point guard had left thumb surgery this off-season and missed the first two weeks of training camp and pre-season.

"I'm not even close, I think I could be a lot better," said Lowry. "I think that if you give me another couple of weeks of playing and give me some extra cardio, get my body a little more right and I'll be a little bit better."

Asked by a reporter if he feels tired on the court Lowry joked: "Who me? If I was, I wouldn't tell you."

After the Magic took a slim one-point lead late in the fourth quarter Siakam and Lowry worked a pick and roll repeatedly to re-establish the Raptors' lead and pull back ahead.

"It was amazing, it was amazing, just how smart he is making decisions with the basketball," said Siakam. "We've always had that chemistry from my first game here."

Jonathan Isaac led Orlando (1-2) with 24 points and seven rebounds. Former Raptors forward Terrence Ross saluted the sold-out Scotiabank Arena crowd of 19,800 after a brief video tribute was played in his honour. He finished with 11 points for the Magic.

It was the first time the two teams had played each other since Toronto beat the Magic in five games in the first round of the Eastern Conference playoffs before the Raptors went on to win the NBA Finals.

The Raptors picked up where they left off in the post-season, taking a 31-22 lead in the first quarter led by Siakam's 11 points and three rebounds.

Lowry's driving layup at the buzzer gave Toronto a 51-46 lead heading into halftime. After shooting 12-of-23 from the floor in the first the Raptors struggled with 5 for 21 shooting in the second, letting Orlando cut into their lead.

"Nothing really surprises me about (Lowry), to be honest with you," said Toronto head coach Nick Nurse. "He is just such an experienced guy and he is such a gamer.

"His shot volume is up and we say keep shooting them. He only took 11 threes tonight, so he is getting there."

Siakam was called for his fifth foul of the night with 4:37 left in the game when he tried to rebound VanVleet's three-point attempt, sending Isaac to the line, where he made both free throws to make it 87-86.

Fouls have been a problem for Siakam early in the season and he said it was something he was going to work on.

"I think something has to be done," said Siakam. "I just have to be careful, I can't get into foul trouble. It's four games in a row."

After Orlando took a 91-90 lead on Markelle Fultz's reverse layup, Lowry took over for Toronto with a three-pointer.

Siakam grabbed a rebound at the other end of the floor and on the ensuing possession Lowry drained two free throws.

A wide-open Siakam floated a jump shot over the Magic to make it 97-91 but Fournier answered with a layup.

A trio of Lowry free throws added to Toronto's lead to make it 100-93 but Fultz dunked on a Fournier miss to keep the Magic in the game. A pair of VanVleet free throws, followed by two more from Siakam, made it 104-95.

"We need (Lowry) out there at the end of the game, to take shots and make shots like he did," said Siakam. "Not even make shots, just make plays and I think that's what he did tonight."