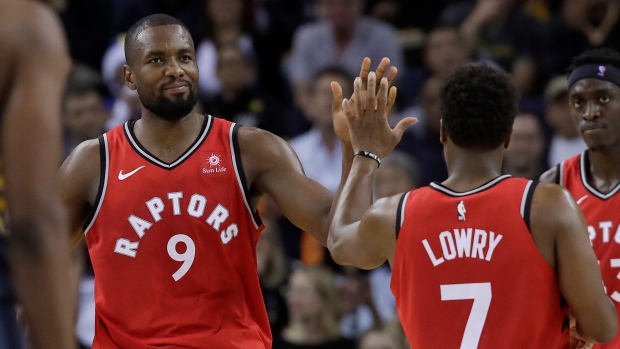 TORONTO – By this point, there aren’t many things left on Kyle Lowry’s NBA bucket list.

He’s a five-time all-star and an NBA champion. He’s made all-NBA and is Toronto’s franchise leader in threes, steals and several advanced statistics. He famously scored his team’s first 11 points in the Raptors’ title-clinching Game 6 win over Golden State last June and just led a historic 30-point comeback victory against Dallas, earning him Player of the Week honours for the sixth time in his career.

He’s building what may be a hall-of-fame resume and, at minimum, will see his No. 7 hang from the rafters atop Scotiabank Arena one day. In 14 seasons, the 33-year-old point guard has done and seen it all… almost, anyway.

On Wednesday, the defending champion Toronto Raptors will kick off the league’s five-game Christmas Day schedule when they host the Boston Celtics at 12:00 p.m. ET. It’s the first time the Raptors will host a game on Dec. 25. It’s also a brand new experience for Lowry, who has never played NBA basketball on Christmas Day.

It may not end up being as memorable as dunking in his first all-star game at Madison Square Garden in 2015, and it definitely won’t be as special as holding up the Larry O’Brien Trophy six months ago, but Lowry has been looking forward to this moment for a long time.

Out of context, you might wonder why the NBA’s Christmas Day tradition means so much to players. Wouldn’t they rather have the day off work? Wouldn’t they prefer to be at home with their families?

For the vast majority of players and teams, being selected to participate in the league’s annual holiday showcase is an honour, not a burden.

Like many of his teammates, Lowry has fond memories of holiday basketball. Growing up in Philadelphia, he would wake up on Christmas morning, gather around the television with his family and watch hours of NBA hoops. Now he’ll be on the other side of the TV with his family, including his two young sons, in the arena watching him play.

“You’re usually sitting around the TV, you’re with your family and your friends and everybody is watching this,” Lowry said. “Now you’re playing in it, so it’s going to be cool. It’s like a badge of honour.”

The holidays are a time of the year when most people can’t help but get nostalgic. For Toronto’s players and coaches – many of who will be making their Christmas Day debuts this week – those memories are so closely tied to basketball.

“Growing up you watch all of those games,” said 25-year-old Rockford, IL., native Fred VanVleet. “It was a big thing, especially before social media and before you could see basketball every night. I didn’t have League Pass growing up so those games meant a lot as one of those milestone – you’ve got Christmas Day, opening day, the playoffs and all-star. You just remember going to your family’s house and the games were on from the morning when you get up and open your presents until you have dinner at night, and everybody’s tuned in.”

“You’ve got your Christmas rituals with your family – going to Midnight Mass and all those kinds of things, opening presents and the dinner and all that stuff,” Raptors head coach Nick Nurse said. “But for me, for the last however many years, it was like, man, I couldn’t wait to have the games going all day long, one after another. It was like the basketball marathon became part of the Christmas tradition for somebody that’s involved in the game, wanting to watch those games.”

“I just remember that I usually had the VCR on record. I would record all the games during the day because there would be stuff that you’d be doing. I’d do that down in the basement, so [my family was] always wondering where I was. They would be upstairs by the Christmas tree and I was always down in the basement watching the NBA games.”

The NBA has put its stamp on Christmas Day.

This is the 72nd year of NBA basketball on Christmas Day. It’s a tradition that dates back to the league’s second season in 1947. Generally, the slate of games features some of the association’s best – or at least most marketable – players, teams and rivalries. In 2008 they expanded the Dec. 25 schedule from two or three games to five.

The NFL rarely schedules games on the 25th and the NHL takes the day off. So, with most people off work and at home looking for family-friendly entertainment, basketball takes centre stage.

“It’s a big deal that everybody’s watching this,” VanVleet said. “It’s one of those things where there’s not really anything else on unless you’re a big Christmas movie guy, but you can [watch] those before Christmas Day. It’s like Thanksgiving football. Christmas Day basketball is a big deal for most guys.”

“I didn’t have cable growing up as a kid but they used to show the Christmas games on ABC all the time and you could catch those games, those games would come on TV,” said 24-year-old Patrick McCaw, who grew up in St. Louis. “So Christmas games are huge. Everybody gets to watch on Christmas Day.”

A larger and more global viewing audience is another perk of playing on Christmas Day, especially for the Raptors, who haven’t gotten much attention in the United States since the playoffs. Wednesday’s contest will be broadcasted on ESPN and is Toronto’s third of 11 games on U.S. national TV this season.

There will be more eyes on them. How many more eyes? The five Christmas Day games last season had an average audience of 5.83 million American viewers on ESPN and ABC. The early game (Milwaukee at New York) had an average audience of 3.17 million. For context, regular season games on ESPN and ABC averaged 1.99 million viewers last year. The three most-watched games of the season were all played on Christmas Day (Lakers-Warriors: 10.21 million, Sixers-Celtics: 7.35 million, Thunder-Rockets: 5.96 million).

Why would that matter to Raptors players? More national exposure, for starters, plus their family and friends back in the U.S. and around the world can watch them play.

“Playing on Christmas Day is special,” said Serge Ibaka, one of just two players on the Raptors’ roster that has done it before. “Your whole family can support you, wherever they’re watching from. Not every team plays on Christmas Day, so I think it’s a special moment.”

Ibaka’s father will be in Toronto for Wednesday’s game. As will his daughter, Ranie, who lives in Orlando. Ibaka is the Raptors’ Christmas Day veteran – he played in six Christmas Day games with the Oklahoma City Thunder from 2010-2015, averaging 11.7 points.

His best performance came at the Garden in New York in 2013, when he scored 24 points in 27 minutes. Although he only scored four points and played 19 minutes in his Christmas Day debut against Denver in 2010, that’s the one that stands out most in his memory. He remembers the special edition jerseys the Thunder wore and that his family came to OKC to watch the game.

“Actually, the first time I was like, why is Christmas Day so special? It’s just another game,” he said. “But it was really special, almost like a playoff game.”

“I’m blessed, I’m thankful for that. It never gets old, [playing on] Christmas Day. It’s a beautiful day. It’s an honour.”

The only other Raptor that’s played on Christmas Day is McCaw, who did it twice. Both games came with the Golden State Warriors and against LeBron James and the Cleveland Cavaliers – a matchup we saw in four straight NBA Finals and one of the best rivalries in league history. He played just five seconds in the first meeting but started, logged 23 minutes and scored nine points in the second.

He remembers thinking about some of the most iconic Christmas Day moments he had ever seen before stepping on the floor – LeBron and the Heat’s Big 3 taking on Kobe Bryant’s Lakers, Derrick Rose’s game-winner over the Lakers in 2011, all those games at MSG, among others.

McCaw was just 6 years old when the Raptors played their first and only Christmas Day game in 2001 – a 102-94 loss to the Knicks in New York. It was one of just two games on the schedule. Knicks guard Allan Houston had a game-high 34 points. Morris Peterson scored 22 for Toronto, Alvin Williams had 18, and Vince Carter – the reason why they were awarded a Christmas Day game to begin with – was held to 15 points on 6-of-20 shooting.

Lowry was 15 at the time, a sophomore in high school. Ibaka, 12, was still living in the Congo. OG Anunoby, 4, and his family had just moved from London, England to the U.S.

It’s taken 18 years – nearly two full decades – for the Raptors to make it back on the NBA’s Christmas Day slate, much to the chagrin of the fan base and even the team.

The NBA had its reasons, most of them business-related, but even those became harder to justify as the Raptors climbed to the top of the Eastern Conference in recent years.

The big American television networks drive the league’s scheduling on Christmas Day and their ratings don’t include the Canadian broadcast viewing numbers, meaning they can’t monetize the Raptors’ primary audience. So, the big question has always been: are the Raptors enough of a draw south of the border?

For years they simply weren’t good enough. After Carter left they didn’t have the wins or the star power to warrant consideration. Even as they began to turn the corner and earn respect around the league this past decade, Lowry and DeMar DeRozan just weren’t as marketable as some of the NBA’s brand name superstars: LeBron, Kobe, Durant, Curry, etc.

Still, you couldn’t exactly call Christmas Day a showcase of the league’s best teams when the Raptors – routinely among the East’s elite – were getting snubbed in favour of the Knicks, who play in a big NBA market but haven’t been relevant in years. On Dec. 25 of last year, Toronto owned the best record in the NBA (25-10) and sat at home while New York, at 9-26, hosted the early game and predictably got blown out by Milwaukee.

That became Toronto’s holiday tradition: wondering what the Raptors would have to do to finally get some love from the league and make it back onto the Christmas Day schedule. Turns out the answer was: win a championship.

The Raptors’ front office had been pushing the league to get a Christmas Day game for years. Lowry had also clamoured for one. Now they’ve got it.

The circumstances aren’t exactly ideal, though. While the Raptors have more than held their own without Kawhi Leonard this season – sitting fourth in the East with a record of 21-9 going into Wednesday’s game – ESPN will almost certainly focus their narrative around the Finals MVP and his decision to leave the champs for Los Angeles over the summer.

Meanwhile, Pascal Siakam – their best player, who is featured in the league’s Christmas Day promos – will miss the game with a groin injury. Marc Gasol and Norman Powell are also out.

The longest serving members of the Raptors organization know the history – how long it took and how hard it was to get a Christmas Day game in Toronto. They also know it could be a while before they get another. Perhaps that makes it even more meaningful. Their plan going into Wednesday’s contest: enjoy it, appreciate it, and put on a show.