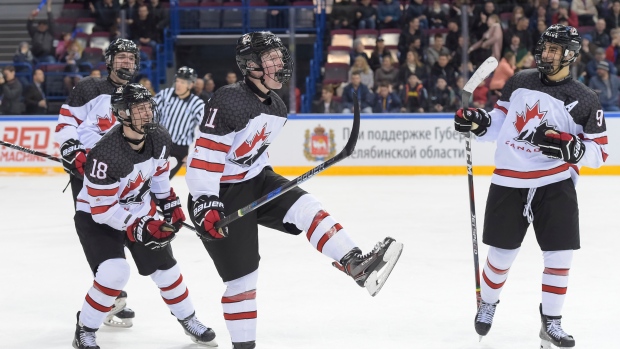 MAGNITOGORSK, Russia — Alexis Lafreniere continued his impressive showing at the world men's under-18 hockey championship, scoring in overtime and adding an assist as Canada beat Sweden 3-2 on Tuesday.

Canada finished the preliminary round on top of Group A with 11 points from three regulation wins and one overtime victory. The Canadians will face the Czech Republic, the fourth-place finisher in Group B, in a quarterfinal game Thursday at Magnitogorsk's Arena Metallurg.

Lafreniere, a 16-year-old star of the Rimouski Oceanic in the Quebec Major Junior Hockey League, has four goals and two assists in four games at the tournament, held in the Russian cities of Magnitogorsk and Chelyabinsk.

Raphael Lavoie and Chase Wouters also scored for Canada in Tuesday's win over previously unbeaten Sweden, which finished second in Group A with 10 points. Olivier Rodrigue made 29 saves.

In other results Tuesday, Finland beat the Czechs 4-2, the United States routed Belarus 8-0 and Russia edged Slovakia 6-5 in a shootout.

Finland, which finished atop Group B with a perfect 12 points, will face Belarus in the quarterfinals, while Russia will take on the defending champion Americans and Sweden will face off against Slovakia.

Switzerland and France will play a three-game relegation series, with the loser replaced by Division I winner Latvia at next year's tournament.